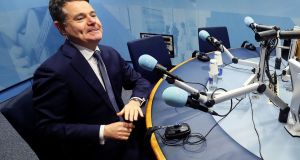 Paschal Donohoe in studio at RTE ahead of the Today with Sean O’Rourke show to take calls from the public on Budget 2019. Photograph: Brian Lawless/PA Wire

Minister for Finance Paschal Donohoe has said that he might have to increase the €1.2 billion Budget allocation for a no-deal Brexit depending on circumstances.

The Minister was speaking on Wednesday morning after he presented a cautious budget that abandoned plans for income tax cuts and declined to repeat the welfare increases that had become customary on budget day, citing the need to prepare for an increasingly likely no-deal Brexit.

He said that a No Deal Brexit would be inherently unpredictable.

“It is possible that more may be needed to be provided,” he said.

“Nothing like it has happend before. We need to see where we stand at each stage. If we need to review it we will,” he said.

Speaking after appearing on Today with Sean O’Rourke, Mr Donohoe also defended his decision to impose a relatively small €6 increase in carbon tax.

He also disclosed that the carbon tax figure was determined by Brexit and if he had pitched it too high, there might have been a significant increase in cross-border traffic to avail of cheaper fuel prices in the North, especially if sterling were to be revalued after Brexit.

He said that in time he hoped that all the money raised in carbon tax (now €26 per tonne) would be ring-fenced for climate change measures.

He also defended the Budget as it applied to the so-called squeezed middle, saying that notwithstanding the lack of income tax reductions, stability in the economy was the most important factor in protecting their incomes and financial security.

Speaking to callers Mr l Donohoe has said “no single budget is capable of making a difference” and that making changes to the economy is the best way.

Mr Donohoe said the last thing he was doing was “handing out any punishment”.

Mr Donohoe said he was informed by the water charges and the need for consensus for change. “It makes me very clear that every cent saved on carbon tax goes back to fight climate change,” he said.

He said there was a need to “make change gradually . . . in a way that gives families, farms and businesses time to prepare for it”.

Mr Donohoe conceded on Tuesday night it was a mostly standstill budget that would make little difference to most people’s finances.

There was also, as expected, an increase in the carbon tax, adding two cent to a litre of petrol and diesel, although increases to home heating fuels will not come into effect until next May.

There were no cuts to personal income tax, despite pledges by the Taoiseach at last year’s Fine Gael ardfheis and an expectation in the party that tax cuts would be a centrepiece of the party’s general election platform.

There were also no general welfare increases, though a range of allowances will see increases.

Mr Donohoe raised additional revenue through increases to commercial stamp duty and adding a further 50 cent to the price of a packet of cigarettes. This enabled him to exceed the spending figures previously indicated by the Government, enlarging the size of the budget-day package to €2.9 billion in net terms.

Although economic growth is forecast to slow sharply to 0.7 per cent, Mr Donohoe defended the growth in spending, with officials adding it was important to consider the “trend growth” of the economy, which was in the 4 to 5 per cent range.

Health spending will now grow to €18.3 billion next year, its highest level, with further recruitment scheduled for 2020. There will also be funding for one million extra home-help hours, a reduction in prescription charges, and moves to provide more medical cards for the over-70s. Health will now account for 28 per cent of all current spending, while social protection will make up over a third (34 per cent).

There was money for more gardaí, teachers, 1,000 special-needs assistants and other public sector recruitment.

The public pay bill will grow by 5.2 per cent to €19 billion, an increase of more than €900 million, while pensions head for the €3 billion mark, a growth of 5.8 per cent. These figures take account of pay increases due to public servants next year under the public-sector pay deal. Mr Donohoe said he expected the deal to last until the end of next year, and he has made no provision for a new deal next year.

Fianna Fáil welcomed some aspects of the budget for which the party claimed credit, but it sharply criticised the Government’s overall approach.

Public expenditure spokesman Barry Cowen criticised Fine Gael’s record of “overspends and missed deadlines” and said the party was “like a stressed-out student staying up late the night before Leaving Cert English paper one, Fine Gael are desperate to make up for lost time”.