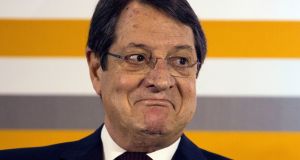 President of Cyprus Nicos Anastasiades has said the country will reject any decision on Brexit that might upset the Belfast Agreement and endanger the peace and stability of Ireland.

Speaking ahead of the visit of President Michael D Higgins this week, Mr Anastasiades said Cyprus “will fight for the best interests of Ireland”.

“Unfortunately our partners are not so firm on the backstop,” he said.

He said Ireland and Cyprus had “strong economic, trade, tourism, financial, educational and people-to-people ties to the UK and are the most exposed [EU] countries to Brexit”.

Mr Higgins arrived in Cyprus on Sunday for the three-day visit at the invitation of Mr Anastasiades, the first state visit by an Irish president since Mary McAleese in 2006. He was accompanied by his wife, Sabina Higgins; and Minister for Justice Charlie Flanagan.

The Cypriot president said the presence of Mr Higgins was an opportunity to strengthen already deep ties and enhance co-operation between their countries.

Mr Anastasiades, who met Mr Higgins during a 2016 state visit to Ireland, said the two countries’ “excellent relations are based on the common ground of independence struggles, fighting against British colonialism”. Irish peacekeepers who served in Cyprus in 1964-1978 contributed to the relationship.

“I have a very strong message for the Irish people. I pledge to protect Ireland’s peace and stability – with the wish that one day it will be one island. The Irish people are one nation,” he said.

“Our division is due to Turkish invasion, the division is not ethnic [between Greek and] Turkish Cypriot compatriots . . . Germany has been reunited, I expect Ireland and Cyprus can be as well.”