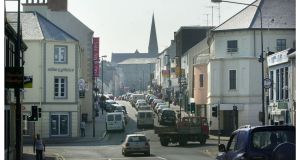 The street in Omagh that was bombed in 1998: a new film calls for greater support for trauma and mental health services in the North Photograph: Alan Betson/ The Irish Times

An expert in trauma and mental health and one of the North’s “unsung humanitarians” has urged Northern Ireland politicians involved in talks to restore Stormont to devise a “major initiative” to assist victims of the Troubles.

David Bolton is the focus of a new film dealing with the impact of Troubles-related trauma in Northern Ireland that premiered in Enniskillen earlier this month as part of the Fermanagh 5Live Arts Festival.

The 55-minute documentary, The Quiet Shuffling of Feet, addresses the issue of trauma through the eyes of 63-year-old Fermanagh man Mr Bolton who assisted survivors of the 1987 IRA Enniskillen and the 1998 Real IRA Omagh bombings.

Mr Bolton, a retired social worker and senior manager in the health service in Northern Ireland, was a founding director of the Northern Ireland Centre for Trauma and Transformation. He was also involved in international work including providing advice and support for those caught up in the conflict in Kosovo and for first responders dealing with the aftermath of the Al Qaeda attack on the World Trade Centre in New York in September 2001.

His book, Conflict, Peace and Mental Health was published by Manchester University Press in 2017. It addressed the impact of more than 3,700 people dying in the Troubles and up to 55,000 being maimed and injured.

One of the book’s central findings was that traumatic experiences have affected the lives of more than 210,000 people in Northern Ireland and that at least 34,000 people in the North have suffered or are suffering from post-traumatic stress disorder (PTSD).

The film was made by Fergus Cooper who has spent a lifetime working in the charity sector in organisations such as Save the Children and Niacro – the Northern Ireland Association for the Care and Resettlement of Offenders.

“The film is a different way of reminding people not to be complacent about the peace process, that there is a huge legacy issue here and that this will go on for generations. There is still work to be done,” said Mr Cooper.

Mr Cooper said he told the story though the lens of Mr Bolton because of his local and international knowledge of trauma.

“David is an incredibly charismatic individual. He is one of the great humanitarians, largely unsung. His reach is well beyond Northern Ireland. This is a body of knowledge that can be shared wider than Northern Ireland,” he said.

“If anything mental health services are in retreat in Northern Ireland,” he added.

It’s a point of view with which Mr Bolton agrees. “The impact of trauma is an incredibly toxic stressor on our community. We are spending only half of what we should be spending,” he said.

The Northern Ireland parties haven’t been able to create a deal to restore Stormont but when and if they do Mr Bolton wants the politicians to place major emphasis on trauma and mental health in any new agreement.

He said when the Belfast Agreement was achieved in 1998 the three big issues were “prisoners, policing, and creating a remodelled Stormont”.

The Cinderella issue was the mental health impact of the Troubles.

“Even though it’s late in the day I’d love to see a major initiative, a major strand of government, coming out of the talks at Stormont around mental health and well-being. This should be seen as a social and economic investment in our future. It’s a no-brainer and we should be doing it.”

The film will be shown at a number of film festivals and will be screened for specific audiences involved and interested in trauma and assisting victims of the Troubles.