Higgins no longer rules out running for second term 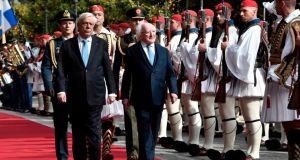 President Michael D Higgins has said he no longer rules out running for a second term of office, providing his clearest indication yet about his future political intentions – despite having ruled out a second term seven years ago.

“Yes, I did say at one stage that getting through the term was in fact the length of my aspirations. I have changed my mind on that because I do think that very solid foundations have been laid and this leaves choices open as to what I may do,” he said in response to a question from The Irish Times.

Mr Higgins has been edging towards declaring a second term, saying some months ago he had not made a decision about his intentions, but he would do so in good time.

Speaking during a state visit to Athens, Mr Higgins said he would announce his intentions after the abortion referendum: “We are in the midst of deciding very serious matters in Ireland at the present time. It’s best that we do that with a discourse that is civil and take account of different viewpoints.”

In separate meetings with Mr Higgins, both Prokopis Pavlopoulos and Alexis Tsipras urged Mr Higgins to seek re-election, according to someone familiar with their private discussions.

The Greek leaders are understood to have told the President they welcomed his “intellectualism and leadership”, particularly in the uncertain times faced today by Europe and the world, reliable sources reported.

Providing another clue, Mr Higgins said he would consider an invite from his Greek counterpart to join the Arraiolos meeting, a group of 13 non-executive presidents who meet once a year to discuss the future of Europe and globalisation.

“I would very much look forward to continuing that conversation with other heads of state,” Mr Higgins said.

Saying he was not standing in the way of anyone else, Mr Higgins said: “And if I did decide to run, it would be by invoking an article in the Constitution which would mean that I would stand as an independent and then, like every other candidate, should there be many, I would take part.”

However, Seán Gallagher, one of the defeated candidates in 2011, said he was “very surprised” to hear that Mr Higgins is considering a second term, given he had ruled that out seven years ago.

“The presidency can play a hugely important role in Irish society and I believe now as I did in 2011, that the office of President should be relevant to the Ireland of today and the current challenges we face.”

Saying that he had not decided on whether he would run, or not, Mr Gallagher went on: “I fully expect a presidential election in the autumn and it will provide an opportunity for a range of candidates to set out their vision for Ireland.”

Meanwhile, Sinn Féin Donegal TD Pearse Doherty has questioned if there is a public appetite for a presidential election, but said there should be a contest for such a position.

“As a matter of course, there should be a contest but whether there is an appetite or not, I’m not sure,” said Mr Doherty, adding Mr Higgins had done a “very good job”.

Sinn Féin leader Mary Lou McDonald has said she believes there should be an election, but Mr Doherty has said he had not given it much thought.

One senior Sinn Féin TD doubted if “there will be a challenge from any of the main parties”.

“He’s doing a very good job,” the TD said, who added that while any challenger would be unlikely to beat Mr Higgins, Sinn Féin would need a “logical, political reason” to field a candidate in order to grow the party’s popularity.

Minister for Justice Charlie Flanagan repeated his view – widely shared in Fine Gael – that Mr Higgins should run for a second term.

“Speaking in a personal capacity I’ve observed him at close quarters since his election,” Mr Flanagan said. “He is a doing a fine job.”

Former taoiseach Bertie Ahern declined to say if he would seek to run for the presidency, but said: “I have high regard for our President and I work with him on the Council of State. I assume he will run again in the autumn for a second term and I wish him well.”