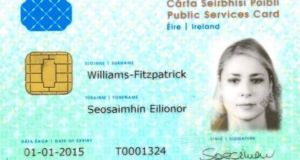 The Oireachtas Committee on Employment and Social Protection was told about 4,000 people had failed to go through the registration process and had their free travel withdrawn. Photograph: Brian O’Brien

Over 450 people have had welfare payments suspended after they failed to go through an identity registration process for the public services card (PSC).

Officials from the Department of Employment Affairs and Social Protection appeared before an Oireachtas committee on Thursday in relation to the PSC project and its linked, digital identity service MyGovID.

They told the committee three quarters of the adult population of the State, or 2.65 million people, now has a public services card. Some 3.14 million had been issued as of Thursday.

There was a greater number of cards than people holding one for a number of reasons, including that people’s entitlements may have changed or a card may have been damaged and replaced. In some cases, cards initially issued for a five-year period had expired.

Concerns have been raised by civil liberties groups and privacy campaigners about the database underpinning the card scheme. One woman in her 70s had her pension suspended for 18 months because she refused to go through the process to get the card. It was later restored on appeal.

Tim Duggan of the department told the Oireachtas Committee on Employment and Social Protection “quite a bit” of the commentary on the card scheme had not been entirely correct and this had led to “some degree of confusion”.

He said the point of the project was not about the card itself, but about the requirement to ensure people verified their identity to a “substantial level of assurance” through the so-called ‘SAFE’ registration process.

It was “not a national ID card” and there was “no intention” for it to be such, Mr Duggan said.

Public bodies needed to ensure they were providing services to the right person and to ensure the person was not pretending to be someone else.

Mr Duggan said in the “vast majority” of cases where payments had been suspended, it was not because people had objected to the card or where they did not believe there was a legislative basis for it.

He said about 4,000 people had failed to go through the SAFE registration process and had had their free travel withdrawn. However, he indicated many of these cases related to elderly people who might no longer be using their entitlement to free public transport.

Mr Duggan said there were about “450-odd” cases where people’s payments had been suspended and in the vast majority of those cases the individuals had “effectively disappeared from our system”.

“The vast majority, we think, have gone abroad,” he said. There were very few cases where people had refused to engage with the registration process, he said.

Senator Alice Mary Higgins said the concern about the project was about the ‘single customer view’ database underpinning it.

She said the Government was asking people to have their information put into a database which could then be put to other uses.

Ms Higgins claimed the legal basis for the project had not yet been illustrated satisfactorily.

Barry Lowry, the chief government information officer, told the committee the MyGovID digital identity being rolled out by the Government was “the only viable approach that can underpin future citizen interaction with a digital Europe”.

If Ireland was to be recognised as a progressive, digital state within Europe then we needed to have a state electronic ID, which was safe, secure and verifiable.

The Government last week issued a new request for tenders for the production and distribution of the public services card.