FG to launch Noone bullying investigation 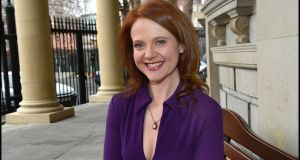 Senator Catherine Noone made claims of bullying and sexism against a member of her own party at a meeting of TDs and senators this week. Photograph: Brenda Fitzsimons/THE IRISH TIMES

Fine Gael has launched an investigation into allegations of bullying made by a female senator at a private party meeting this week.

Senator Catherine Noone made claims of bullying and sexism against a member of her own party at a meeting of TDs and senators this week.

Ms Noone said she had been subjected to misogyny by a male colleague over a number of years.

Both Ms Noone and the figure at the centre of the allegations have declined to comment.

In a statement on Thursday, Fine Gael said it is dealing with the claims as an internal issue. “Fine Gael Parliamentary Party Chairman Martin Heydon has written to the General Secretary Tom Curran regarding an internal matter within the party,” the statement said.

“Due process will be followed and the matter will be dealt with swiftly. Fine Gael expects party colleagues to treat all with the utmost respect, professionalism and dignity at all times.

“Any internal party matters are dealt with the strictest of confidence and Fine Gael will not be making any further comment.”

In her statement, Ms Noone said the alleged behaviour had grown progressively worse over recent weeks and highlighted an incident with the male colleague at a private Fine Gael meeting this week.

The Senator told the meeting she had spoken Mr Heydon about the issue previously, but felt recent events had warranted a response from the party.

Replying at the meeting to the comments, Taoiseach Leo Varadkar said he was disappointed to hear such claims and insisted bullying would not be tolerated within the party.

Mr Varadkar added he wanted to investigate the matter further.

Minister for Justice Charlie Flanagan also stressed avenues were available within the party to those with concerns of this nature.

He also expressed his concern about the allegations raised by Ms Noone.

The Senator was the chairwoman of the Oireachtas committee examining the Eighth Amendment.

A number of members present said Ms Noone was visibly upset raising the concerns.

She was speaking during a discussion on the centenary of women becoming eligible to vote.

The Senator said women would be reluctant to participate in politics unless they were treated as equals.

She did not name the person against whom she was making the allegations.