Has the Government’s plan to end homelessness achieved anything?

Rebuilding Ireland was launched two years ago. There are still 9,846 people homeless 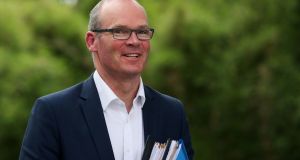 The plan, which was launched by former minister for housing Simon Coveney, aimed to eliminate homelessness and to rapidly increase the supply of housing, most particularly social housing, by 2021. Photograph: Brian Lawless/PA Wire

It was billed as ambitious and imaginative in its reach, and radical in its approach but, two years on, has the Government’s plan to end the housing crisis delivered and has Ireland been rebuilt?

The plan, which was launched by former minister for housing Simon Coveney, aimed to eliminate homelessness and to rapidly increase the supply of housing, most particularly social housing, by 2021.

The most recent figures show the average rent is €1,261 and there are 3,086 rental properties on the market.

Despite the best efforts of many, the statistics show the strategy has struggled to have any effect. The housing crisis continues to be the biggest risk to the economy and one of the greatest societal challenges the country faces.

Labour TD Jan O’Sullivan says people wanted the plan – Rebuilding Ireland – to work. “It was more hope than faith. We hoped it would be that serious effort to address the complex housing crisis but the delivery has been an abysmal failure.”

In the area of homelessness, there was a commitment to end the practice of using hotels and B&Bs for homeless families by July 2017. The goal has never been reached and no new target date has been set.

The document outlined the Government’s ambitions to move those in emergency accommodation to HAP (housing assistance payment) tenancies. But two recent reports found failures in this system as many homeless families are reluctant to accept HAP tenancies as they fear losing their place on the social housing waiting list.

Rebuilding Ireland also committed to develop a comprehensive strategy for the rental sector but one has not been published.

Rent pressure zones (RPZ) have been introduced, limitations have been placed on landlords who wish to sell their properties when tenants are in situ and the Residential Tenancies Board (RTB) has been given additional powers.

However, the European Commission has stated the RPZs are not working, the legislation is being exploited by some landlords and many believe the RTB still does not have adequate authority.

The final pillar committed to developing a National Vacant Housing Re-Use Strategy by the first quarter of 2017, but it has never been published.

Fianna Fáil TD Darragh O’Brien describes Rebuilding Ireland as a roadmap of failure. “Taking politics out of this, housing is a crisis. The Government is divorced from this reality. Rents have spiralled, there has been no affordable housing scheme, they have not built on State land and a whole generation of people are being priced out of ever owning their own home.

Niamh Randall of the Simon Community says there were positive aspects to Rebuilding Ireland. In the first instance, it acknowledged that housing and homelessness cannot be dealt with in isolation.

Without housing and support, homelessness cannot be eradicated. The problem is the pace of delivery, Ms Randall says.

Two years since Rebuilding Ireland’s launch, the same problems continue to plague the housing market – the over-reliance on the private sector, the reluctance by the State to invest in social housing, the inability to control rents and the lack of affordable homes.

Darragh O’Brien believes Fine Gael’s ideology is getting in the way of tackling the problem. Minister for Housing Eoghan Murphy insists the plan is working.

Fine Gael inherited a broken system from Fianna Fáil in 2011, he says, where there were 3,000 ghost estates, a 90 per cent decrease in construction activity and thousands of people working in the industry emigrating or without work.

“Firstly, let’s deal in facts and not political attacks. The facts show Rebuilding Ireland is working. Fianna Fáil destroyed the housing sector – both social and private. Their talk of Fine Gael having an ideological problem is astonishing. They have hard necks and short memories.

“We are the party sorting out their mess. The housing crisis is the long sting in the tail of Fianna Fáil’s destruction of our economy,” Mr Murphy says.

However, for Niamh Randall and the Simon Community there is a real fear that the problems in the housing market are being normalised and an acceptance that this level of housing distress is part of modern day Ireland.

“This Government needs to redouble its efforts. Look again at Rebuilding Ireland and see what is working and what is not working.

“We can’t forget these are real people. Not plans and numbers but real people impacted and affected.”