Increase in homeless families outside Dublin ‘of grave concern’ 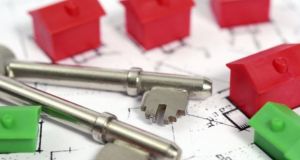 Landlords evicting tenants so they can sell their properties continues to be the primary cause of family homelessness, a new Focus Ireland report says.

In 2017 a record number of people became homeless, according to the Family Homelessness End of Year Review 2017. By the end of the year there were 1,439 (20 per cent) more people homeless than there had been at the start of the year.

The number of homeless families increased by 203 (17 per cent) to a total of 1,408. The rate of increase slowed significantly during the second half of the year and began to reverse slightly in the fourth quarter.

A 62 per cent rise in the number of families outside Dublin becoming homeless is of “grave concern”, Focus Ireland said, although it noted some of this rise could be explained by changes in how the Department of Housing compiles the figures.

The report suggests factors that drove family homelessness in Dublin 2015 and 2016, such as rising rents and rising evictions, are now being experienced in the rest of the country.

“To the extent that this is the case, the official figures reflect an emerging reality, in which case we would expect to see a continued escalation of homelessness in an increasing number of towns and cities.”

Measures successfully introduced in Dublin, such as The Homeless Housing Assistance Programme (HHAP), need to be rolled out nationally, it said.

Under the current law landlords can evict tenants on short notice if they intend to sell their property. This is a primary driver of family homelessness, according to the report.

“The number of families becoming newly homeless is continuing to rise and continues to be driven by landlords evicting tenants to sell their property. Without structural changes to reduce this inflow into homelessness, it will be hard to make further progress in reducing total homelessness.”

There is some good news in the figures. A greater number of families than ever before left or avoided homelessness in 2017, the charity said. The quality of emergency accommodation has also increased with the introduction of Family Hubs.

HHAP payments played a significant role in curtailing the rise in family homelessness. A third of all people who moved on from homelessness did so using the subsidy.

However the report warns: “The shortage of available private rented accommodation poses serious questions as to whether the slowdown in family homelessness in Dublin can be sustained.”

Increases in Rent Supplements and Homeless Assistance thresholds in mid-2016 have also had a positive effect, but this has now been eroded by increased rents, it said.