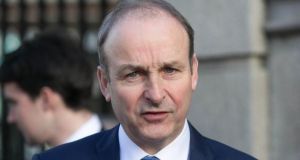 There were sharp exchanges in the Dáil between Taoiseach Leo Varadkar and the Fianna Fáil leader over responsibility for the homelessness crisis.

Micheál Martin accused Mr Varadkar of “failure to deliver” on repeated housing announcements, of being in denial about the homelessness crisis which was a “blight on our society” and of not caring enough about the issue.

But the Taoiseach insisted “there is no denial whatsoever of the enormous economic and social challenge” in housing and homelessness, and the Government was determined to do all it could to alleviate it.

He in turn hit out at Fianna Fáil and said it was important to “double back a little and not forget how it came about”.

The Taoiseach pointed to a “seven-year period during which almost no new homes were built and almost no social housing was built by the government because we could not afford to do so because of the perilous state of the public finances”.

The private sector was producing no homes because of the collapse of the banks and the construction sector.

Mr Varadkar said “this is the backdrop against which we are trying to deal with this enormous social crisis which involves a deficit of as many as 250,000 homes”.

Mr Martin had raised the issue in the wake of the report by the Children’s Rights Alliance about the negative impact of homelessness on children and their educational prospects.

The report stated that homeless children lose out on every level of their education, from having to get up at 5.30am to cross the city to the school they originally attended, to being exhausted and hungry.

The Fianna Fáil leader said such experiences “should demand an urgent, effective and impactful response from the Government”.

He highlighted the 6,000 homeless adults and almost 4,000 homeless children and said that in “initiative after initiative that the Government has announced, target after target is being missed”.

Mr Martin said the Taoiseach had made many announcements of various schemes, including 800 units announced in January 2017 under the repair and leasing scheme, but none had been delivered.

He added that the National Asset Management Agency was due to deliver 6,946 units but only 2,400 were delivered. The affordable homes target for the end of 2018 was 400 but zero had been delivered.

Mr Martin said the children referred to in the Children’s Rights Alliance report were being “failed by the Government” in its response.

But Mr Varadkar said 2,000 families were taken out of hotel accommodation last year and most of them moved into houses and apartments. A total of 14,046 new dwellings were completed last year, a 50 per cent increase on the year before and the Government expected up to 20,000 new homes to be built this year.

He said 7,000 new homes were added to the social housing stock, the biggest in a long time and 2,600 homes out of use were reconnected to the ESB grid and 1,000 unfinished houses “from ghost estates that Fianna Fáil left behind, were completed and made available for people to buy and live in”.