Brussels has vowed to stand by Ireland in no-deal ‘doomsday scenario’, says Taoiseach 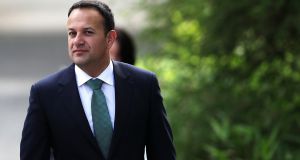 The European Union has reassured the Government that no physical checks will be needed on the Border even if the UK crashes out of the bloc without a deal, Taoiseach Leo Varadkar has said.

Mr Varadkar said that such a “doomsday scenario” would mean that the “commitments of others” would be relied upon to prevent a hard border.

As the Government indicated it was stepping up preparations for a “no deal” Brexit, Mr Varadkar warned of the implications for British air travel if the UK crashes out of the EU without a deal next year.

“The situation at the moment is that the United Kingdom is part of the single European sky, and if they leave the EU they are not, and that does mean that if there was a no-deal, hard Brexit next March the planes would not fly and Britain would be an island in many ways and that is something that they need to think about,” the Taoiseach said.

“You cannot have your cake and eat it. You can’t take back your waters and then expect to use other people’s sky.”

Mr Varadkar was speaking after a special Cabinet meeting in Derrynane, Co Kerry, on Wednesday where Ministers agreed to hire 1,000 additional customs and veterinary officials.

As well as the UK promise on the backstop, the Taoiseach also noted that senior EU figures, such as European Commission president Jean-Claude Juncker, have also promised the Government that no physical infrastructure will be required.

“Also, president Juncker and my EU colleagues have on many occasions said that they wouldn’t require us to put in place a physical infrastructure and customs checks on the Border between Northern Ireland and Ireland,” he said.

Mr Varadkar also said he “profoundly” disagreed with comments made by former UK foreign secretary Boris Johnson, who said on Wednesday that Northern Ireland issues have dominated the debate on Brexit.

“I am glad that prime minister May disagrees with him too,” Mr Varadkar said. Theresa May will be in Northern Ireland on Thursday and Friday.

Reports from Brussels indicated that this week’s resumed negotiations between the UK and EU teams were proving difficult. On Tuesday, The Irish Times reported there had been no progress on the Border issue – regarded by both sides as the main remaining obstacle to a withdrawal agreement – during a session devoted to Ireland on Monday.

The new British Brexit secretary Dominic Rabb is due in Brussels on Thursday for his first meeting with the EU’s chief negotiator Michel Barnier.

It is expected that the EU side will table a new wording of the proposed protocol on the Irish backstop, though Brussels could not confirm this on Wednesday. Senior Irish sources said they expected to discuss a new text in the coming days. The UK rejected a proposed EU text earlier this year, while the EU side rejected a British proposal that would have allowed a special status for all of the UK.

In London, Mr Johnson used a resignation statement in the House of Commons to condemn Ms May’s Chequers proposal as “Brexit in name only”. He called on the prime minister to change course and seek a free-trade deal with the EU rather than remaining aligned on regulations for goods and agrifood products. And he took aim at her commitment to agreeing a backstop that would guarantee that there could be no hard border in Ireland.

Conservative divisions over Brexit were on display during prime minister’s questions. But Ms May received support at the 1922 Committee of Conservative backbenchers on Wednesday, with one MP announcing that he was withdrawing a letter calling for a no confidence vote in her leadership.