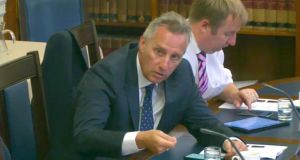 Ian Paisley had “apologised unreservedly at the outset for his unintentional failure to register the hospitality he received,” a lawyer for the DUP MP said. Photograph: PA

Ian Paisley was under pressure on Wednesday night to resign as an MP after he faced suspension from the House of Commons for failing to disclose two paid family holidays to Sri Lanka.

The Westminster Parliamentary Commissioner for Standards Kathryn Stone found Mr Paisley had breached parliamentary rules by not registering the holidays and also by lobbying on behalf of the Sri Lankan government, which paid for the holidays.

The suspension for 30 sitting days – if approved by the House of Commons, as seems likely – is due to begin on September 4th, at a time when there could be crucial Brexit votes at Westminster and at a time when British prime minister Theresa May is dependent on DUP votes to remain in power.

Sinn Féin leader Mary Lou McDonald called for Mr Paisley to “do the honourable thing” and resign, a demand echoed by SDLP and Alliance politicians.

There is also a strong possibility that if Mr Paisley – who is to make a statement in the Commons on Thursday – does not resign, a petition could be organised which would force him to stand down.

Under a parliamentary “recall petition” a petition could be triggered whereby Mr Paisley could lose his seat if 10 per cent of the eligible electorate in his North Antrim constituency – about 7,500 people – signed a petition to have him removed as MP.

The SDLP, Sinn Féin, the Ulster Unionist Party, Alliance and the Traditional Unionist Party indicated on Wednesday they would either push for or support such a petition.

The DUP in a brief statement said it had noted the findings and “these matters will now be considered by the party officers”.

Senior party figures, however, seem convinced that the controversy will see Mr Paisley having to stand down and a byelection being called.

Mr Paisley has privately indicated that if forced from the seat he took over from his father Ian that he would recontest North Antrim, as he is entitled to do.

Mr Paisley and his family made two visits to Sri Lanka in March/April 2013 and July 2013. These visits were paid for by the Sri Lankan government.

The Daily Telegraph reported last September the visits cost £100,000 and that he may have been in breach of the rule prohibiting paid advocacy.

At the time Mr Paisley said the claims were “devoid of fact or logic” and threatened defamation proceedings against the newspaper.

Solicitor Paul Tweed, on behalf of Mr Paisley, said his “client has apologised unreservedly at the outset for his unintentional failure to register the hospitality he received”.

“While accepting the decision of the House Standards Committee, he nonetheless continues to take issue with the sensationalised report in the Daily Telegraph,” he added. “Legal proceedings are being considered. No further comment will be made until Mr Paisley has addressed the house on Thursday.”

Mr Paisley was accompanied by five family members on the first trip and by three on the second.

“Although Mr Paisley initially described these two visits to Sri Lanka as ‘official visits’ . . . for his accompanying family members they were clearly holidays,” the commissioner added.

Mr Paisley accepted and apologised for not registering the two holidays within the required 28 days but denied engaging in paid lobbying on behalf of the Sri Lankan government.

Ms Stone referred to a letter Mr Paisley wrote in March 2014 to the then prime minister David Cameron to “lobby against supporting a UN resolution” on the internal conflict in Sri Lanka.

Ms Stone “concluded that this amounted to asking for an exclusive benefit for Sri Lanka, when he had received personal benefit and hospitality from the Sri Lankan government within the previous 12 months”.