Now that ‘if’ has turned to ‘when’, Sinn Féin at risk of having a lame duck leader 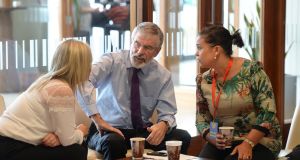 Like a television soap opera that promises a dramatic conclusion but leaves you hanging until the next episode, the question of the Sinn Féin leadership has been pushed back to the next episode in November.

The party’s ardfheis that month will see Gerry Adams perform what will surely be a political first by simultaneously standing for re-election as leader and announcing his exit plan.

Yet the slow-motion process – he said something similar at the same gathering, in the same venue, around the same time last year – is intended, he says, to bring the party membership along with the process of transition.

The message at this year’s party think-in, held again in the City North Hotel in Gormanston, differed in one respect from last year, however. The leadership question is no longer one for the distant future.

Adams has said he will outline his “own future intentions” at the RDS ardfheis, raising the prospect of putting a time limit on his leadership.

“It’s now a matter of when, not if,” said one Sinn Féin figure. The “when”, of course, is entirely up to Adams. He again repeated that he intends to lead Sinn Féin into the next election, although he could hardly say otherwise if he is to avoid becoming a lame duck.

But does he become a lame duck leader in November and, if so, for how long? Another ardfheis in spring 2018 to deal with the issue is possible, according to some in the party. It could clear the way for a new leader in time for the next election but, even if Adams stays on for that election, he has now set the clock ticking on his leadership.

The prospect of a leader on borrowed time being the standard bearer for a party seeking a five-year mandate for government does not command political credibility.

Adams staying in situ also gives Sinn Féin’s opponents another reason not to enter government with the party, since his presence is the most obvious illustration that it has failed to move on from its past.

The Louth TD said his statements yesterday were serving notice to the Sinn Féin rank-and-file that transition at the top is coming, even if the pace of change is still unknown. It will inevitably be a matter for discussion at a series of forthcoming meetings with members across the country, as it has been for some time.

The other discussion will be on future coalition options ahead of the next election, and Adams repeated the party’s policy priorities on that front yesterday.

His call for a referendum on Irish unity within five years raised the ire of the DUP, with that party’s leader Arlene Foster calling it “divisive and destabilising”. But it could illustrate an example of an opening position, perhaps similar to other positions that could change in any post-election haggling.

One TD earlier this week said Sinn Féin will decide its bottom line for coalition in private but would not give any public indication of what it is , for obvious reasons.

In that vein, Adams’s call for a referendum within five years could be measured against private comments from some TDs that they do not see any concrete moves towards reunification for at least a decade.