Irish man’s case in Egypt, due to be heard on Monday, pushed back to September 18th 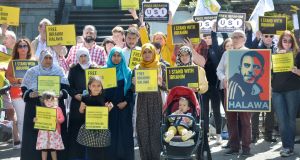 Ibrahim Halawa’s sisters Nosayba, Somaia, Omaima, Fatima and Khadija with their children Aisha, Sundus and Hamza protesting along with members of Amnesty International outside the Egyptian Embassy in Dublin on August 17th to mark the fourth anniversary of his arrest. Photograph: Alan Betson

The family of Ibrahim Halawa have expressed concern over the latest delay in concluding the trial of the young Irish man and the effects this is having on his physical and mental health.

Despite expectations the trial would be concluded on Monday, Mr Halawa was informed at a court hearing in Egypt that his case was postponed for a further three weeks.

Mr Halawa’s solicitor, Darragh Mackin of KRW Law, said his client had endured four years in detention because of a series of legal difficulties.

The latest postponement was “unexpected, unjustified” and truly devastating for Mr Halawa and his family, Mr Mackin said.

“We are now four years on, with each day and each false dawn having a hugely significant mental and physical impact on our client’s health.

“It is not known when this case will ever end. Such irrational and unpredictable decisions cannot be allowed to continue, and in particular when they operate in a vacuum of lawfulness, depriving our client of his basic rights,” he added.

Mr Halawa was arrested along with hundreds of others in Cairo during a mass demonstration against the military ousting of the Muslim Brotherhood government in August 2013. He was 17 years old at the time.

His case will now not be heard again until September 18th.

Diplomatic officials are preparing for three outcomes to the trial. If Mr Halawa is declared innocent, it will take a number of weeks for him to return to Ireland. He would have to be removed from the no-fly list and a new passport would have to be allocated.

Mr Halawa could be found guilty but sentenced to three or four years in prison, which he has already served.

The third option is the now 21-year-old could be found guilty and face a lengthy sentence. The Irish Government will push for him to serve any outstanding sentence in Ireland.

Minister for Foreign Affairs Simon Coveney said former taoiseach Enda Kenny had been given a clear commitment by the Egyptian president to allow Mr Halawa to return home. That pledge was echoed in a telephone call to Taoiseach Leo Varadkar on Monday.

Mr Coveney stressed the importance of such a significant intervention from the Egyptian president. He said: “The Irish Government’s position is clear. We want the return of Ibrahim to Ireland.”

Mr Ryan said the delay was characteristic of what has happened throughout this trial, where “lack of due process has been one of the most damaging things to the health of this young man”.

He added: “Ibrahim has already lost four of the most important years of his young life languishing in prison. It’s essential that now, at 21 years old, he be given the chance to rebuild his life with the support of his family and friends in Ireland.”

Three of Mr Halawa’s sisters – Somaia, Fatima and Omaima – were also due to receive verdicts in their cases on Monday. The three women were arrested on the same day as Mr Halawa but were released on bail in November 2013 and returned to Ireland.

In a statement, Somaia said her family was devastated at the latest delay in the trial. “It is truly upsetting and heartbreaking to constantly keep having our expectations and hopes shattered into a million pieces.

“It is not just Ibrahim’s life that is being played around with but also the entire family’s life. We would ask that our family are allowed some time to ourselves during this difficult period.”

1 Joe Biden does not want to see guarded Border in Ireland after Brexit
2 Stir-crazy Dutch holidaymakers set to descend on Caribbean island
3 Bloomberg ranks New Zealand top in fight against Covid-19 - but how did Ireland fare?
4 Covid-19: Museums, cinemas set to reopen next week as Varadkar warns of New Year restrictions
5 Shops, hairdressers and hotels expected to reopen next week
Real news has value SUBSCRIBE