No sign of quick fixes in health and housing 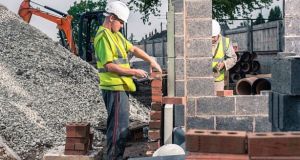 “Events on Monday sharply illustrated how the housing and health issues have elbowed their way into the front of the Government’s agenda.” File photograph: Getty Images

Fine Gael Ministers gather in Government Buildings on Tuesday for discussions on the forthcoming term with political storm clouds gathering in health and housing.

The Cabinet is scheduled to meet on Wednesday for the first time since the August break, but Taoiseach Leo Varadkar has summoned his Fine Gael Ministers – both Cabinet and junior office holders – for political discussions on Tuesday at which he is expected to stress the need for Ministers to convey a consistent message.

However, amid Opposition accusations that the Government is obsessed with spin and communications, Government Buildings sources were keen to stress yesterday that this evening’s meeting will discuss policy and delivery of services, while Ministers will also discuss legislative priorities for the forthcoming Dáil term.

Events on Monday sharply illustrated how the housing and health issues have elbowed their way into the front of the Government’s agenda. A Morning Ireland report of the circumstances faced by one homeless family – as related by a teenage girl – not alone illustrated the human cost of the housing shortage, it scared the Minister for Housing Eoghan Murphy on to the 1pm news, saying how sorry he was for her plight, and promising imminent Government action on the issue.

Not long beforehand, the Irish Nurses and Midwives Organisation (INMO) released statistics from its regular counts of patients waiting on trolleys which show, the union said, that the numbers of patients waiting for hospital admissions has increased by over a quarter in the last 12 months.

Talk to Government insiders and they all speak of Brexit as the great challenge facing the country, especially as the warning signs tumble out of every EU-UK negotiating session in Brussels. But it is not on the political agenda in anything like the same way as housing and health.

There will be many more stories like yesterday’s Morning Ireland report on the airwaves and in the newspapers over the coming weeks and months. Each one of them heightens the sense of urgency, both in public debate and private Government discussions.

The great political difficulty for the Government is that in these two areas – health and housing – where the demands of politics are for immediate results and short-terms, the solutions are stubbornly long-term in nature.

Any Government has the ultimate political tool – the power of executive action. It enables Government to dominate the political agenda, to command public and media attention. Opposition lives off comparative crumbs. But it is a double edge-sword; with this power comes responsibility – which often translates as culpability for the failures of the State and State agencies.

As the Varadkar administration chisels out its first Budget over the coming weeks, it’s clear that housing and health will continue to dominate the political agenda. It’s hard to see how this can spell anything but trouble for the Government.