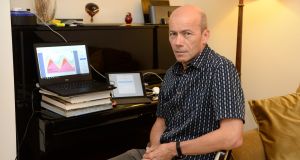 The temperature was edging towards 26 degrees, on a day of glorious sunshine in late May without a drop of rain, and many families were out in their back gardens, watering plants or filling paddling pools.

While most of the country was enjoying the fine weather on May 28th, alarm bells were ringing internally within Irish Water.

The national water utility can sustainably supply the greater Dublin area with 582 million litres (m/l) of water a day. On that sunny Thursday last week, demand had surged to 613m/l, nearing the system’s absolute maximum capacity.

From early May demand had been steadily increasing, with stored water levels dropping, according to internal management reports, and the rain showers forecast for this weekend and early next week will barely make a dent on the shortfall.

The country would need “a minimum accumulation of 100mm rainfall spread over a number of weeks and a return to normal precipitation levels thereafter” to replenish reservoir supplies, an Irish Water spokeswoman said.

A water conservation order – known as a hosepipe ban – is now increasingly likely for Dublin and surrounding counties, to prohibit unnecessary water use, the utility has warned.

The impending hosepipe ban is the result of a “perfect storm” of factors, according to Tom Cuddy, Irish Water’s operations support manager.

There is the longstanding problem of a “chronic capacity issue” supplying water to a rapidly growing Dublin area, he said.

That has been “overlaid since March with the Covid situation, and people at home using more water”, with more pressure coming down the tracks as businesses reopen, Mr Cuddy told The Irish Times. The fact Dublin has seen the driest and sunniest spring on record has been a further factor in bringing Irish Water supplies to drought levels.

The infrastructure supplying water to the capital has long been under strain, exhausting current sources such as the river Liffey to their limits.

The Co Limerick native is the point man overseeing demand on Irish Water’s supply to the greater Dublin area, which includes Wicklow, Kildare, and Meath.

Since mid-March, Irish Water staff have decamped from their office and now remotely monitor the strain on the system from their kitchen tables and spare rooms.

Every morning a management report lands in the inboxes of staff, outlining demand from the previous day and water levels in reservoirs and other sources.

From as far back as January Mr Cuddy could see water levels in lakes were lower than usual, and by mid-March officials were seeing growing pressure on the system, in part due to coronavirus.

Domestic demand accounts for about two-thirds of overall water usage. The lockdown and associated increased handwashing has seen Dublin drawing over 600m/l of water a day. Internal analysis shows an upward trend from April to June, and large spikes in water usage during sunny days.

Forecasts from Met Éireann show the country could get between 20-30mm of rainfall over the next week, but longer seasonal forecasts suggest a dry, hot summer overall.

At the rate the greater Dublin area is growing it needs an extra 10m/l of water per day every year. Irish Water has a number of projects, such as upgrade works to Leixlip treatment plant, which will buy the capital “five to six years”, Mr Cuddy said.

However, to keep up with Dublin’s sustained growth long-term Irish Water “need a new source”, he said. The main plan is the controversial development of a €1.6 billion pipeline to pump water from the River Shannon to Dublin.

Irish Water would need to have “an extra 10-15 per cent capacity” in the Dublin supply to move away from being on constant “high alert”, Mr Cuddy said.

Until then people may have to get increasingly used to measures such as hosepipe bans.