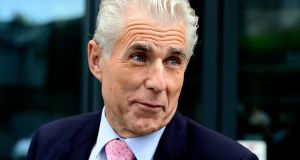 Liam Doran: “I feel frustration absolutely beyond measure at the failure to recognise the reality of the crisis.” Photograph: Cyril Byrne

A senior trade unionist has strongly criticised the Government’s “failure” to take Brexit into account during the public-sector pay talks that have resulted in a draft agreement.

Liam Doran, general secretary of the Irish Nurses and Midwives Organisation, claimed the Department of Public Expenditure and Reform had shown no awareness of, interest in or willingness to address the impact of the United Kingdom’s departure from the European Union on the Republic of Ireland’s ability to retain healthcare staff.

“I feel frustration absolutely beyond measure at the failure to recognise the reality of the crisis. I left the pay talks this morning after two and a half weeks at three o’clock. Nothing came back from the management side in that two and a half weeks. Nothing at all,” he said.

Mr Doran said Brexit would make it even harder for Ireland to attract and retain doctors, radiographers, physiotherapists and other professionals.

He was addressing the Seanad Special Select Committee on the Withdrawal of the United Kingdom from the European Union, which was sitting in the chamber, shortly after 10am on Thursday.

“I didn’t come here to say this, but there was nothing done on the urgency or immediacy of measures necessary to arrest the haemorrhage that we’ve suffered the last number of years in front of everyone’s eyes, but parts of Government still seem absolutely oblivious to it. ”

He was responding to a question from the Fine Gael Senator Jerry Buttimer.

Mr Doran said Brexit would make UK health authorities intensify their strategy of “aggressively recruiting” nurses from Ireland to fill skills shortages. Parts of the NHS such as Great Ormond Street Hospital for Children, in London, were hiring graduates trained in Ireland as soon as they were registered and before they began working here.

“The pace and intensity of this recruitment drive by the UK will only increase as a result of Brexit, as the numbers applying from within and outside the EU to work in the United Kingdom will fall,” Mr Doran said.

He said the number of applications to the Nursing & Midwifery Council, the professional regulatory body in the UK, had dropped by more than 90 per cent in recent months.

Mr Doran said the Government must ensure that healthcare between the Republic and Northern Ireland, and between Ireland and Britain, “has no borders” and said it was crucial to maintain the mutual recognition of Irish and UK qualifications for nurses and midwives.

He said the planned national children’s hospital, the largest capital development in the history of the Irish health service, was designed to provide an all-island service. “Nothing should be done which will in any way harm, restrict or impede the access of children in all 32 counties from accessing this world-class service in the years ahead.”

Mr Doran said “all-island” specialist children’s services, such as paediatric cardiac surgery, were provided by Our Lady’s Children’s Hospital, Crumlin, in Dublin. Altnagelvin Area Hospital, in Derry, provided radiation and oncology services, as well as emergency cardiology services, for people on both sides of the Border.

“The challenges to ensuring access to quality healthcare in the most effective manner possible are very significant as we face Brexit.”

The union executive will consider the pay-talks document on Monday and Tuesday before putting it out to ballot.