Is having a gay taoiseach a big deal for Ireland? 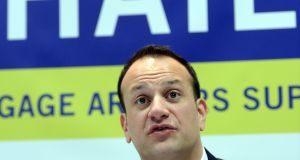 Leo Varadkar: So many prominent roles are filled by openly gay and lesbian people that many forget such a situation would have been unthinkable a generation ago. Photograph: Cyril Byrne

On February 1st, 2009, at the height of her country’s financial crisis, Jóhanna Sigurdardottir was elected Iceland’s first female prime minister and the world’s first openly gay head of government.

Two years later, Elio Di Rupo, who had publicly come out under media pressure in 1996, became prime minister of Belgium.

And in December 2013, Xavier Bettel succeeded Jean-Claude Juncker to become the 24th prime minister of Luxembourg. In 2015 he married his partner of five years.

So when, barring parliamentary mishaps, the new Fine Gael leader Leo Varadkar is elected taoiseach some time in the next few weeks, he will become the fourth openly gay head of government in modern European history.

Not an earth-shattering landmark, but far from inconsequential either. The movement towards equal rights for all, regardless of sexual orientation, has been the most rapid social change of recent times. The fact that many prominent roles in society are filled by openly gay and lesbian people is now considered so unremarkable that many forget such a situation would have been unthinkable a generation ago.

Varadkar’s sexual orientation, along with his part-Indian parentage, has already been seized upon by international media as a signifier of Ireland’s supposed transition from conservative traditionalism to liberal modernity.

“Ireland, a devoutly Catholic country that decriminalised homosexuality only 24 years ago, is poised to elect its first openly gay prime minister next month,” wrote the New York Post.

“It would be a monumental piece of history for the once-staunchly Catholic country,” wrote Gay News in the UK.

We can expect much more of the same when Varadkar actually becomes taoiseach, and more again when he attends his first major summit.

It’s not surprising that the current international coverage focuses so much on the future taoiseach’s sexual orientation, along with his youth and ethnic background, with scant attention paid to his political views or track record.

And yet, bar a couple of heavily coded incidents, Varadkar’s sexuality barely cropped up during the leadership contest.

In the weeks before the campaign proper, the Irish Independent ran a couple of packages drawing deliberate visual comparisons between Simon Coveney, picturing him with his wife and children, and Varadkar, standing obviously solo.

But the leadership contest itself was into its last week before deputy leader James Reilly chose to note pointedly that Coveney “understands what it means to rear a young family”.

Does the notion that a national leader should ideally be equipped with a spouse still retain some purchase in the public imagination? Varadkar will be Ireland’s first unmarried taoiseach, as well as its youngest. While he has been in a relationship with Matthew Barrett for the past two years, they are not life partners and will continue to pursue their respective career paths (Barrett is due to spend most of the next two years developing his medical skills in the US).

Suggestions that Varadkar’s sexuality might prove a stumbling block for older, more conservative members of Fine Gael have not been proven, although political observers continue to contend that it did exist as a factor, and may have helped Coveney win the membership ballot. Whether true or not, it certainly was not a significant enough factor to have a material effect on the final result.

More fundamentally, does it matter that Varadkar is gay? For activists and legislators who worked to liberalise laws and change attitudes over the past three decades, his election does carry symbolic weight.

“What it does mean is that gay and lesbian people are now seen as incredibly ordinary,” says Andrew Hyland, former director of the Marriage Equality campaign. “As far as I can see, it hasn’t been an issue at all in the leadership contest.”

Hyland contrasts this with the 2011 presidential campaign. “David Norris was viciously attacked for his sexuality then,” he says.

The marriage referendum campaign had an enormous impact, Hyland believes. “During the campaign a lot of stories were told,” he says. “What changed was that people realised that LGBT people were just like everybody else. Everywhere – not just in Dublin – being gay was normalised. Now there are gay weddings across the country.”

But, apart from the effect of the referendum, there are other differences between the two election campaigns and the two candidates. Presidential elections often descend to personal attacks on individual candidates, and Norris had been known for years as a campaigning gay politician, rather than a politician who just happened to be gay.

In the Fine Gael election, Varadkar was appealing to a small, very specific set of voters with a message rooted in Fine Gael values.

Perhaps what really makes Varadkar unusual is that he took so long to come out as gay. That a young urban professional of his generation should wait until his mid-30s before choosing to be open about his sexuality suggests quite a deep-seated conservatism. While political critics suggest he is better seen as the privately educated son of a doctor from an affluent suburb than as any symbol of social change, the fact is he can be both these things at the same time.

“He isn’t an activist but the fact he came out just before the referendum was very important,” says Hyland. “And the fact that just two years after the referendum, we’ll have a gay taoiseach is still huge for Ireland.”