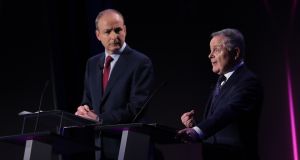 Nobody messed up, but nobody hit a home run either in the first seven-way leaders’ debate of the general election campaign.

Heading into the RTÉ debate, in front of a live audience at NUI Galway, Mary Lou McDonald had the most to gain. Sinn Féin has made hay and burnished its anti-establishment credentials with its protests over being shut out of the head to head debates between Micheál Martin and Leo Varadkar.

It also has the momentum in this campaign, with a series of opinion polls putting it around the 20 per cent mark. McDonald’s performance in this debate has probably confirmed her position as Ireland’s marmite politician, but she seems comfortable in that role.

Those who support Sinn Féin, or are considering doing so on polling day, will have been cheered by her performance. She landed hits on Martin and Varadkar, successfully stitching them together in a number of her attacks. Perhaps the most memorable was when she said Sinn Féin would not take lectures on prudence from one party which crashed the economy and another responsible for building “the most expensive hospital in the world”.

Those who view the Dublin Central TD as an grandstanding populist will have had their views reconfirmed by the debate, too. This is not a great concern for Sinn Féin - these are not the voters McDonald is courting in this campaign.

Martin, likely conscious that he needed a strong performance after he was bested by Varadkar in their first head to head last week, started well.

The first question from Claire Byrne, who did a skilful job in moderating the lively participants, was on the issue of coalition and why Sinn Féin was not good enough for Martin, Varadkar and Labour leader Brendan Howlin.

Martin attacked McDonald on his claim that the party is run by unelected officials - vigorously disputed by Sinn Féin - and on the issue of the Special Criminal Court, taking a firm line early on.

His steady performance underlined the fact that he is his party’s best asset in this election campaign, but he faded as the debate progressed, almost in direct contrast to Varadkar, his main rival.

Varadkar started slowly and was subdued from the off, perhaps in the belief that no good could come of his engaging in haggling with the six others. If that was the approach, it came across as too languid in the early exchanges, but he eventually sparked to life.

He was successful in laying the foundations for how Fine Gael hopes to finish the campaign - on tax and how the party can be trusted to manage the economy - and made little mention of Brexit, which has not really featured on the doorsteps, despite Fine Gael’s hope that it would.

“It’s not a bribe,” he said of his tax policy. “It’s allowing you to keep more of the money you’ve worked hard for.”

Howlin worked hard to insert himself into the debate, and made valid points. He also drew applause for his call for an immediate rent freeze, although he and Social Democrats co-leader Róisín Shortall took positions which were at times almost indistinguishable - a point Byrne put to both.

Eamon Ryan of the Greens was also a slow starter, but made reasoned and considered points when he got into his stride.

He was effective in claiming that Fine Gael and Fianna Fáil’s housing policies would amount to giving “the cheque to the developer” but will be disappointed that climate change did not feature until very late in the night, when many would have tuned out.

Richard Boyd Barrett of Solidarity-People Before Profit scored significant applause with attacks on issues such as corporate profits and vulture funds, but it is hard to believe that his popularity with the audience will be replicated by the party across the country at large.

Overall, the debate is unlikely have changed many minds, but may have pointed the course of how this campaign will finish - with Varadkar trying to steer the Fine Gael campaign towards trust and the economy, and others trying to stop him from doing so.