General Election 2020: What slogans are the main parties using?

Candidates’ campaign posters have already started to appear in some areas 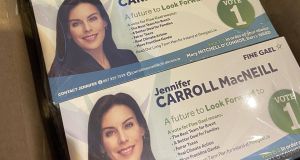 The general election will be held on Saturday, February 8th, Taoiseach Leo Varadkar told the Cabinet on Tuesday morning.

Candidates’ campaign posters have already started to appear in some areas with the Taoiseach’s posters appearing before the official date for the election had been announced.

In terms of election slogans, Fine Gael has changed its from 2016’s “Let’s Keep the Recovery Going” to “ A future to Look Forward to”.

Fianna Fáil is sticking with its 2016 slogan of “An Ireland for all”.

Although Labour has not released its slogan yet, Tipperary TD Alan Kelly is going with his own personal slogan of: ’Deliver MORE for Tipp!’

The Saturday polling day is unusual, with all elections in recent decades taking place on a Thursday or Friday.