Ongoing strikes planned over pay differences with their counterparts in England 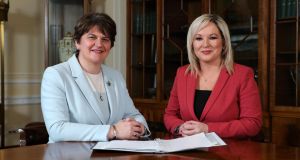 The new Northern Executive met for the first time on Tuesday while the new Northern Assembly also got down to normal business with the first major announcement a move to solve the health workers’ industrial dispute.

Nurses and health workers had staged a number of strikes in recent months over pay differences with their counterparts in England, with a continuing series of strikes planned.

Health unions, particularly those representing nurses, also complained of serious staff shortages that were affecting health care. More widely the North has been gripped in a health crisis with waiting lists of up to three years.

Mr Swann in the first significant act by the Executive announced in the Assembly that he is providing an additional £30 million to meet the annual £109 million that is required to achieve parity.

“To be clear this new offer will reinstate pay with England, and not just for this year,” said Mr Swann.

“Decisive action has been taken on the vital issue of staffing and my department is providing a written commitment to immediate high-level engagement with unions to produce a costed implementation plan on safe staffing within an agreed short period,” he added.

“The breakthrough we all wanted has been achieved,” said Mr Swann.

The Minister met health unions on Tuesday to brief them on the funding. He said that meeting was “constructive”, raising expectations the industrial action will be called off.

Mr Swann’s department ahead of the return of the Executive had found £79 million to meet much of the parity requirement but an extra £30 million was needed. The Minister said the money would come from existing finances.

Meanwhile, the DUP Minister for Education Peter Weir announced that 12 primary and five post-primary schools and one special school are to receive capital investment of £45 million.

Mr Weir said improving the schools’ estate was one of his priorities. “This is an investment in the future of our young people and will enhance the quality of their learning experience, leading to better educational opportunities and outcomes,” he said.

First Minister Arlene Foster and Deputy First Minister after the first meeting of the new Northern Executive on Tuesday said the five party power-sharing Executive, “based on mutual respect and trust”, can help rebuild public confidence in the devolved institutions,

They said work would start now to implement the priority proposals in the New Decade, New Approach deal.

“We are energised and resolute in moving forward together for the benefit of all of the people of Northern Ireland, ” said Ms Foster.

“There are significant challenges ahead of us, but equally we have a real opportunity. With strong leadership and collegiate working we will make sure that our public services are transformed,” added the DUP leader.

Sinn Fín’s Michelle O’Neill said there was a “collective will among all parties in the Executive to transform our public services and deliver the improvements that are desperately needed”.

“This won’t happen overnight. It will need a coordinated, sustained approach to bring lasting, positive change for all the people of the north,” added the Sinn Féin deputy leader.

“Politics is never easy and being in a five party Executive comes with its own set of unique challenges. But we have one shared purpose – to improve people’s lives. We are committed to working together to deliver for all in our shared society,” said Ms O’Neill.

The Alliance justice minister Naomi Long meanwhile in a statement condemned a so-called punishment shooting in Belfast which left a 39-year-old man with life changing injuries.

“Violence has no place in our society and the actions of those who terrorise their own community by bringing guns on to the streets must be condemned by all of us. Nothing justifies such attacks and they have no place in a Northern Ireland that is trying to move forward,” she said.