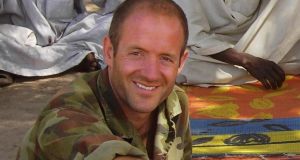 Cathal Berry, former second in command of the Army Ranger Wing, photographed in Chad in 2008.

The former second in command of the Army Ranger Wing is to run in the forthcoming general election on a platform of improving conditions in the Defence Forces.

Retired commandant Cathal Berry, who is a qualified medical doctor, will stand as an Independent in Kildare South.

Mr Berry quit the Army last year in order to campaign against Government policy, which he said was responsible for the recruitment and retention crisis currently affecting the Defence Forces.

A veteran of 23 years, Mr Berry led Irish troops in Chad during the elite Army Ranger Wing’s deployment there as part of a European peace enforcement mission.

The Kildare South constituency contains a large number of military families due to the location of the Curragh Camp there.

However, Mr Berry faces an uphill battle. Although the constituency will become a four-seater for the first time this election, one of those seats will be reserved for Fianna Fáil TD Seán Ó Fearghaíl due to his position as Ceann Comhairle.

According to Mr Berry’s website, if elected he will focus on the health service, ending the housing crisis, protecting the environment and supporting students and military families. An online fundraising page has raised more than €7,500 for his campaign.