Garda head of finance accuses internal auditor of defaming him 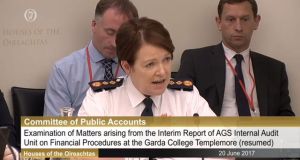 The Garda head of finance has accused the internal auditor of defaming him in a report on financial irregularities at Templemore Garda training college.

Correspondence released to the Oireachtas Public Accounts committee showed a series of exchanges between Michael Culhane to auditor Niall Kelly.

The documents show Mr Culhane alleged Mr Kelly “deliberately and falsely created the defamatory impression” that he conspired with the college management in the financial management practices and concealed efforts from the audit committee.

“Unless this defamatory construct is withdrawn I am putting you on notice that I am reserving my right to issue legal proceedings against you for defaming my character and professional reputation.”

Mr Kelly released an interim report in March 2017 outlining how the college had 50 bank accounts, was renting out land it did not own and fit out privately owned properties.

The Pac is tasked with examining the mismanagement of money and whether the Garda Commissioner acted appropriately when in receipt of the information. The Garda head of legal affairs Ken Ruane has contradicted Nóirín O’Sullivan’s testimony to the Oireachtas Public Accounts Committee. Mr Ruane has written to the committee to raise objection to Ms O’Sullivan’s evidence before the Pac in relation to financial irregularities in Templemore.

He has taken issue with a number of statements made by the Commissioner made at the Pac meeting last week including a claim by Ms O’Sullivan that Mr Ruane has not suffered professionally.

Mr Ruane, who is a senior civilian member of the force, said documentation provided to the committee has proven aspects of his role were taken from him including discipline and professional development.

Additional layers were created and his reporting structures to the Garda Commissioner changed, he added.

The correspondence also questions a claim made by the Commissioner that she made all “relevant parties” aware of the allegations on financial mismanagement at the college when she first learned of them in July 2015.

Mr Ruane said he cannot accept and does not agree with this statement. The Minister for Justice and the internal audit unit in the gardaí were not informed until March 2016 of the extent of the financial mismanagement.

The head of legal affairs also informed the Oireachtas committee Ms O’Sullivan is maintaining privilege over legal advice given to her.

He states the Commissioner wrote to him on May 30th stressing her desire to retain that position.

The Pac had asked Mr Ruane to clarify a number of points which were the source of contradiction with the Commissioner.

Ms O’Sullivan is expected to respond before Thursday. The head of Garda human resources John Barrett is also due to send the committee correspondence today, which is expected will contradict the Commissioner’s evidence too.