Down and out SDLP mowed down by ‘tribal juggernaut’ 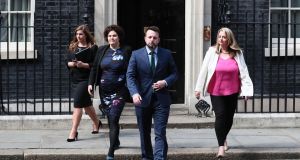 Colum Eastwood and members of the SDLP after talks at Downing Street. Photograph: Gareth Fuller/PA Wire

In the days before the Westminster election, an SDLP veteran had a row with two of his daughters, both in their early 20s, after they told him they were going to vote Sinn Féin.

“He almost threw them out of the house,” said a friend later. He gave his daughters a lecture, telling them that the SDLP was the party of civil rights, peace and reconciliation. Sinn Féin, meanwhile, had been tied to an organisation that killed more than 1,800 people, wounded thousands more, believing that “a million unionists could be bombed into a united Ireland”.

Today, the SDLP is bruised and grieving following its disastrous outing in the election, one where former party leaders Mark Durkan lost in Foyle, Alasdair McDonnell in Belfast South, while Margaret Ritchie fell in South Down.

One veteran SDLP source whose involvement in politics dates back to the civil rights days of the 1960s has a very concise take on why his party now has no seats in the House of Commons.

“It’s impossible to resist a tribal juggernaut,” he said.

Witnessing Sinn Féin come within one seat and 1,168 votes of the Democratic Unionist Party in the Assembly election in March jolted the unionist community into rallying behind Arlene Foster in the Westminster poll in June.

The March result sent a strong constitutional message about the strength of Northern Ireland’s union with Britain, puncturing Gerry Adams’s call for a Border poll on a united Ireland in the next five years.

But, obversely, many nationalists bought into the Sinn Féin argument that coming together behind Adams, the party’s northern leader Michelle O’Neill and abstentionist House of Commons candidates would hasten a united Ireland.

The result was polarisation, 10 DUP and seven Sinn Féin MPs. The SDLP on the nationalist side and the Ulster Unionist Party on the unionist sides were squeezed to a political death.

There were other factors, too: the SDLP’s inability to match Sinn Féin in structure, finance and organisational ability to get canvassers and voters out.

Though still early days, the SDLP does not yet have a “reboot” plan: “We have heard the verdict of the voters, we accept that verdict, and we now intend to listen hard to understand what has been said to us ,” says leader, Colum Eastwood.

“We will not rush into any knee-jerk reactions but nor will we be slow in doing what is required,” added Eastwood, whose leadership seems safe since he is not being blamed for the juggernaut.

Neither is he being blamed for the loss of three SDLP councillors on Belfast City Council who resigned from the party in a row over the harassment of women by anti-abortion activists outside a Belfast clinic.

Here the majority view within the SDLP is that the councillors rather than the leader were at fault in not obeying a central party instruction. However, he did consider stepping down, as he told the BBC at the weekend.

The road ahead is unmarked. History does not much interest the young. The final IRA ceasefire is two decades old and there is a generation that has known only peace. Some, perhaps, are romantically taken by talk of a united Ireland.

The younger generation has no visceral knowledge of where such impatience can lead, the veteran SDLP figure lamented, though he acknowledged: “Yes, Sinn Féin are the sexy party at the moment.”

In a sea of negatives, he sought some positives. If the Westminster seats are gone, the SDLP still won 95,419 votes in that election – the third largest haul of the five main parties that contested.

In addition, the party has 12 Assembly members and some 65 councillors in Northern Ireland’s super-councils which gives grassroots representation. By contrast, Sinn Féin has 105 councillors.

Foyle can be retaken from Sinn Féin, the SDLP believes. Lost by just 169 votes, the election is being investigated for alleged voter fraud, following charges that proxy voters were 17-times more commonly used there than elsewhere.

South Belfast could possibly be won back, though numerous party figures fear that South Down where former leader Margaret Ritchie lost her seat to Chris Hazzard is now firmly in Sinn Féin hands.

Still, there is doubt about a rising. The SDLP has never been able to match, or even come close to Sinn Féin organisationally. It is also financially bust. It is a party competing with a movement where the movement always wins.

Unlike Sinn Féin, the SDLP is notoriously individualistic, inclined to geographical and other squabbles. Today, there are divisions even about which fork to take in the road that lies ahead.

If re-established, the Northern Executive has one ministry that is the SDLP’s if it wants to take it. Some do not want to do so. Others believe it would give the party a stronger profile and Stormont presence.

The other idea is the notion of linking up with Fianna Fáil. But here some members, pointing to the “social democratic and labour” name of the party, insist that this is contrary to the SDLP’s culture and principles.

At 57, Patsy McGlone, an Assembly member for Mid-Ulster, has dedicated most of his adult life to the party. Unlike some he built a strong constituency base, holding his seat for nearly 15 years. Like others, he is deflated but he is nonetheless tentatively charting a way forward – one that could see links with a party in the Republic, probably Fianna Fáil though he will not say so.

“We certainly have to expand and broaden our co-operation with others,” he said, “We want to reconcile Ireland and that is about how democratic nationalist Ireland reconciles with unionist Ireland. We can’t do that on our own.”

Nationalists cannot just be left with Sinn Féin, he argues: “It is very difficult to think that a movement that inflicted so much on what is seen to be the other community and also on its own can lead the charge for reconciliation.”

Despite voter polarisation, a significant element of nationalist Ireland will keep faith, he believes: “There always will be people in the North who are on the constitutional nationalist path and who always want to follow that pathway.

“People are saying there are only two options. Do we fold up shop or do we get on with it and rebuild and recharge? There are 96,000 people out there who want us to rebuild, recharge and get organised. So you just get on with it.”