Call for investigation into alleged bullying at translation unit 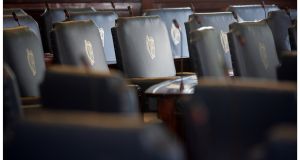 Multiple grievances have been lodged by and against several staff members in the Oireachtas translation office, and claims of stalking and threatening correspondence have been made. File photograph: Alan Betson/The Irish Times

Sinn Féin has called on the Houses of the Oireachtas to make a public statement on allegations of harassment and intimidation in the translation unit in Leinster House.

Multiple grievances have been lodged by and against several staff members in Rannóg an Aistriúcháin, the Oireachtas translation office, and claims of stalking and threatening correspondence have been made.

It has also emerged 11 of the 21 translators have sought transfers from the office, while two are on long-term sick leave.

The translation office provides the official translations of the Acts of the Oireachtas and translation of material for the Order Papers of both the Dáil and the Seanad.

Mr Ó Clochartaigh said: “The best thing that the Houses of the Oireachtas Commission could do now is to issue an accurate statement about these allegations and as much as they can say about them at the moment – how many people are involved, what is the basis for these allegations, and are they being dealt with in the appropriate manner?”

“If anything untoward has been done, then certainly that must be investigated.”

Documents released under the Freedom of Information Act include allegations that a number of errors and omissions made their way into legislation when Bills were translated from English to Irish.

If a conflict arises between the Irish and English versions, the text in Irish prevails and the Irish Act has the force of the law.

Mr Ó Clochartaigh said the Houses of the Oireachtas Commission needed to outline if this was the case.