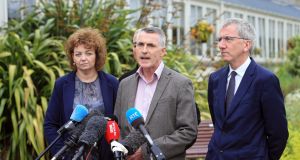 Negotiations to salvage powersharing in Northern Ireland are set to continue as parties mount a last-ditch effort to strike a deal ahead of Thursday’s deadline.

Talks extended late into Tuesday night at Stormont Castle in Belfast, as they did on Monday, but there was little sign of a breakthrough that would lead to the restoration of a devolved executive.

Sinn Féin has accused the DUP of refusing to budge on any of the substantive issues at the heart of the crisis.

The DUP accused Sinn Féin of indulging in “high-wire acts”.

Sinn Féin party chair Declan Kearney did hint movement was possible on one precondition — its opposition to DUP leader Arlene Foster returning as Stormont first minister — if the DUP gave ground on other matters.

DUP negotiator Edwin Poots suggested a “parallel process” could be initiated where a coalition executive is formed while talks on the outstanding issues continued.

Logjams include Sinn Féin’s demand for legislative protections for Irish language speakers and the question of whether Ms Foster can return to the first minister’s office while a public inquiry into a botched green energy scheme is ongoing.

The parties have until 4pm on Thursday to restore a devolved executive or Northern Ireland faces the prospect of a return of direct rule from London.

Asked if Sinn Féin was prepared to drop its opposition to Ms Foster returning as first minister while the Renewable Heat Incentive (RHI) was ongoing, Mr Kearney stressed the urgent need was to address the “rights and equality” issues.

But he added: “In those circumstances, if in fact we can find resolution and progress on all of the fundamental issues, then we can address the issue of the future role of the DUP leader in a possible future executive but at this point that question is academic.”

“I can’t say they are easy but nonetheless we want to get Stormont up and running and we can get it up and running straight away and distribute the money our DUP have successfully received from the UK government,” he said.

“We believe we need to be respectful of all cultures and all traditions across Northern Ireland and are working hard to find a means through that and ensure that we can continue to deliver.

“I would encourage Sinn Féin to be mature, no high-wire acts, let’s get down to work, knuckle down and find a way through this, and it is possible if people apply themselves.”

Northern Ireland Secretary James Brokenshire warned that time was running short to strike a deal. Although he stressed the cut-off point was set in law, he did not definitively rule out another extension.

“It was an act of parliament that set that and therefore it is that very clear deadline that we are seeking to ensure is met,” he said.

Ms Foster was forced from office in January when Sinn Féin’s then deputy first minister, the late Martin McGuinness, quit in protest at the DUP’s handling of the RHI — a scheme that left the administration facing a £490 million overspend.