King’s Inns monopoly on training barristers ‘should be ended’ 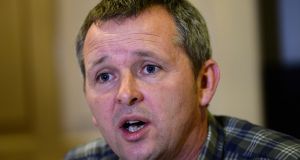 The monopoly of the King’s Inns society should be ended and all universities should be permitted to train barristers, the Dáil has heard.

People Before Profit TD Richard Boyd Barrett said there was no proper statutory basis for the operation of the King’s Inns, which “ensures that a very small, well-vetted elite decide who gets to be a barrister and controls the legal system and who is kept out”.

He said third-level institutions such as UCD, NUI Galway and Trinity College and others should be allowed to train barristers.

The Dún Laoghaire TD also said “the idea that we should not criticise judges has to end. They should be allowed to criticise us politicians. I’ve no problem with that.”

But Green Party leader Eamon Ryan believed the Judicial Appointment Commission Bill could have the effect of viewing judges as “the enemies of the people”, which Minister for Justice Charlie Flanagan vehemently rejected.

Mr Ryan said he heard Taoiseach Leo Varadkar cite the British legal system’s method of selection as an example of why the appointments system should be changed and he was “slightly concerned that an Irish parliament is looking to Britain” as an example for its legal system.

The Dublin Bay South TD said no argument had been made as to why it had to be a lay chair rather than the Chief Justice.

The TDs were speaking during the first of three days of debate on the controversial Bill which reforms how members of the judiciary are appointed.

The Bill replaces the existing board that appoint judiciary with a commission of 13 representatives with a lay majority and a lay chairperson. The commissionwill recommend three nominees for any position rather than the current seven.

Solidarity TD Mick Barry said that judges themselves had described the system of appointments to the judiciary as political.

He said High Court judge Mr Justice Peter Kelly described the appointment of judges to the Supreme Court as “purely political” and he said Judge Michael Pattwell had described his own appointment as political.

Mr Barry said it cost €12,560 to do a year’s study at King’s Inns and “there are very few ordinary people who can come within an ass’s roar of that”.

He pointed out that the average salary of an Irish judge was three times the European average “so how can they not have an elite outlook?”.

He mentioned 79 unemployment blackspots in the State and asked how many children from those areas would have the opportunity in life to go on to serve on the judiciary.

Independents4Change TD Mick Wallace said the controversy over the appointment of former attorney general Máire Whelan to the Court of Appeal showed that “the real problem of patronage was within the Cabinet rather than in the commission”.

He said most cases were heard in the District and Circuit Courts and he believed the Presidents of District and the Circuit Courts should be added to the commission, which might give judges a majority but would be a compromise for having a lay chairman.

Independents4Change TD Clare Daly described the Bill as “much ado about nothing” and “the worst example of a political soap opera carried out at the expense the common good”.

She said there was already a judicial appointments Bill in place which had gone through to the second stage, from Fianna Fáil justice spokesman Jim O’Callaghan.

Independent TD Michael Healy-Rae opposed the Bill and described it as “using a sledgehammer to crack a nut”. He added that there were only 10 or 12 judicial appointments a year and “I think there are far more pressing issues that need to be dealt with”.

Social Democrats TD Catherine Murphy said the Bill was being portrayed as if having a lay majority and chairperson was a “silver bullet that will magically reform our judicial system”.

However, while she did not believe the legislation was perfect “it is a move designed to bring the judicial system out into the light and make it more diverse”, but it required significant amendment.

Ms Murphy said the impression was being given that the lay members of the commission are “randomers who will just be picked off the street” and that section of the legislation had to be amended.

Independent TD Mattie McGrath praised Minister for Transport Shane Ross, who proposed the Bill, and said he vigorously supported reform of how judges are appointed.

He said he had to declare an interest because he had been before the courts “and I didn’t find that experience very good”.