‘We don’t want them to leave the EU,’ Varadkar says on first summit trip 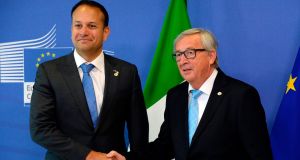 Taoiseach Leo Varadkar has said “the door always remains open” to the United Kingdom reversing its decision to leave the European Union.

Attending his first EU summit, Mr Varadkar said he was “really pleased to be here in Brussels at my first European Council meeting”.

“I think I’m arriving at a time when there is cause to be optimistic about Europe. The European economy is growing faster than the American economy and also we see renewed European unity around important issues such as climate change -- the fact that we’re reaffirming today that European governments are going to stand by our commitments under the Paris accords, even if other countries are not,” he said.

On the Brexit talks, Mr Varadkar said that “what’s much more important than the timetable is the outcome.”

“I would much rather that we have a good deal for Ireland in time, than one that doesn’t work for us in a shorter time period. And of course when it comes to issues relating to the border, the border between Northern Ireland and Ireland, it will be difficult to determine the final shape of that until we know what the new trade arrangements are between the United Kingdom and the EU,” he said.

“But our objective is a very clear one and it’s a very simple one: that there should not be an economic border between Northern Ireland and the Republic of Ireland. Part of the reason why we have a successful peace process, and the reason for the improvement in the economies north and south is that there is no economic border, and that remains our objective,” he said.

Mr Varadkar also raised the possibility of the UK staying in the customs union or the single market.
“You know, the door always remains open for the United Kingdom... You know, countries can take positions, very strong positions, negotiating positions and yet the final outcome can be one that’s more favourable. While Britain says that they intend to leave the customs union and intends to leave the single market, they also say that they want a free trade agreement and many of the elements of a free trade agreement while not being the same as the customs union, may not be that far from it either.”

The members of the European Council - the EU’s highest decision-making body which includes the heads of government of all the 28 member states - has gathered in Brussels for the two-day summit.
It is Mr Varadkar’s first summit, and the new Taoiseach is on a getting-to-know-you mission among his fellow EU leaders and is seeking to establish relationships with key institutional leaders such as Mr Juncker and Mr Tusk.

According to his spokesman, Mr Juncker told the 38-year-old Mr Varadkar that he was only 39 when he became the prime minister of Luxembourg.

Mr Varadkar pointed out he was the first Taoiseach born since Ireland became a member of the then-EEC. The two men discussed Brexit and the Irish priorities in the negotiations.

Although Brexit is not on the official agenda for the Brussels summit, the issue will dominate many of the conversations at the event.

At the leaders’ dinner this evening, British prime minister Theresa May is expected to speak about the British intentions for the Brexit negotiations, which began here last Monday.