Garda Commissioner will not be asked to stand aside despite inquiry 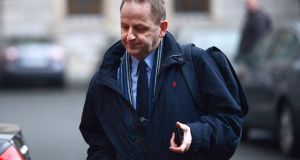 The Government will not ask Garda Commissioner Nóirín O’Sullivan to stand aside from her position despite being the subject of a statutory inquiry.

The Government is to establish a commission of investigation into allegations that senior gardaí engaged in an orchestrated campaign to discredit a Garda whistleblower.

A spokesman for the Government confirmed Ms O’Sullivan would remain while the nine-month investigation is carried out.

The Irish Times understands that retired high court judge Iarfhlaith O’Neill, who was asked last October to take a look at the allegations and report his findings within weeks, has recommended that further investigation is warranted into claims made by Supt David Taylor.

Mr Taylor alleged in a protected disclosure to Tánaiste and Minister for Justice Frances Fitzgerald that he was instructed by senior Garda management todiscredit whistleblower Sgt Maurice McCabe by spreading rumours about his professional and personal life.

Mr O’Neill reported to Ms Fitzgerald on December 7th. His report has not yet been published.

The allegations centre on Supt Taylor’s allegations that he was instructed by senior members of the force, including Commissioner Nóirín O’Sullivan, to spread untruths about Mr McCabe.

Mr Taylor and Mr McCabe were asked to make disclosures to the judge, but neither were interviewed.

In her 10-page submission to Mr O’Neill, seen by The Irish Times, the commissioner denies she was involved in any such campaign against Mr McCabe.

Mr O’Neill’s report will not be published but his recommendations will be.