Ministers at odds over inviting Donald Trump to Ireland 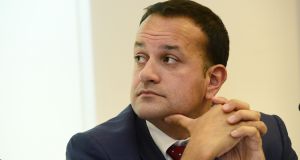 Two Government Ministers are at odds over whether Taoiseach Enda Kenny should invite US president Donald Trump to visit Ireland.

Minister for Social Protection Leo Varadkar says he would not invite US president Donald Trump to visit Ireland if it were up to him.

But Minister for Jobs Mary Mitchell O’Connor said she was in favour of Mr Trump being invited as a way of bolstering “a good collaborative relationship between Ireland and the US”.

As controversy continues, Minister for Finance Michael Noonan said the Taoiseach must get the “timing right” if any invitation was to be extended to Mr Trump.

“I think he should invite him at some stage,” Mr Noonan told the Limerick Leader, “but I think an early visit might be controversial”.

“In all these things, the only reason he would invite him would be for the economic benefit of the country, and if it was too controversial it probably wouldn’t be of economic benefit. So it’s a matter of timing, but he certainly shouldn’t rule it out,” Mr Noonan said.

The Minister for Finance was previously criticised for being part of a welcome party for Mr Trump when the US billionaire visited county Clare in 2014, arriving in his private jet at Shannon Airport to visit his newly acquired golf resort in Doonbeg.

Mr Noonan dismissed the criticism at the time, saying: “Would there be criticism if it was an IDA factory that was going into West Clare with 300 jobs? This man says he’s going to spend at least double the purchase price for investment down there.”

Mr Varadkar was asked about the prospect of a visit by Mr Trump to Ireland on RTÉ’s Today with Sean O’Rourke show, saying: “I’m not sure what purpose it would serve”.

He said: “An invite will be the Taoiseach’s decision. I wouldn’t invite him.”

On the possible tourism and trade benefits from a presidential visit, Mr Varadkar said these stemmed “from a visit that goes well. I wouldn’t necessarily assume that’s the kind of visit it would be”.

Speaking in Kilkenny, however, Ms Mitchell O’Connor referred to the number of Irish people employed by American companies which had a presence here.

She was speaking at the announcement of 140 jobs in a joint venture between Oscar-nominated local company Cartoon Saloon and Canadian animation giant Mercury Filmworks.

On Sunday night, the Government said no decision had been made on whether to invite Mr Trump to visit Ireland, contradicting reports Sunday that an invitation had been ruled out.

Speaking to reporters in Malta at last week’s EU summit, the Taoiseach had declined to rule out an invitation to Mr Trump, saying that he would consider the question of an invitation when he was in Washington for St Patrick’s Day.

On Sunday night, the Government spokesman said that Mr Kenny’s remarks still stood, but that the Taoiseach would be concentrating on raising the plight of illegal Irish immigrants in the US when he visits Mr Trump in the White House.

Government sources stressed that the importance of the meeting with the US President went beyond the occupant of the office at any one time.

Fianna Fáil finance spokesman Michael McGrath said the Taoiseach was right to go to Washington to meet Mr Trump, but that he should not have an invitation “in his pocket”.

Labour leader Brendan Howlin, who last week argued that the Taoiseach should refuse the invitation to the White House, tweeted: “This is getting silly. Possibly inviting Trump. Then ruled out. Now possible again. Taoiseach should rule it out definitively.”

In a statement issued over the weekend, Sinn Féin leader Gerry Adams said that, if invited, he would attend the White House on St Patrick’s Day.

Mr Adams will travel to Washington for St Patrick’s Day, when he will have a number of meetings with Irish-American leaders, he said.

“At this critical time in the Irish peace process,” he said, “it does not make sense for Irish leaders to exclude ourselves from an opportunity to engage on critical issues like the crisis in the political institutions, Brexit, the future of the Good Friday Agreement, Irish unity and the rights of the undocumented Irish in the USA.”