Jonathan Bell to stand as Independent in Northern election 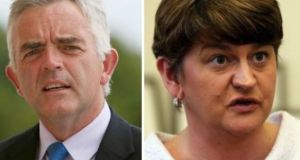 Jonathan Bell (left) is to run as an Independent in the Assembly elections, he has announced.

Jonathan Bell, whose cash for ash allegations helped trigger the political crisis in Northern Ireland, is to stand as an Independent in the Northern Assembly election, he announced on Tuesday.

The suspended DUP member had accused some party special advisers of delaying the closing down of the Renewable Heat Incentive (RHI) scheme which ultimately could cost Northern Ireland taxpayers up to £490 million.

The DUP denied the claims while former First Minister Arlene Foster accused Mr Bell of mishandling the issue when he was the minister for investment, trade and enterprise.

On Tuesday Mr Bell said he is to run again in the Strangford constituency where he is an outgoing Assembly member.

Mr Bell told the BBC Radio Ulster Nolan Show that “it was time for truth” and he would be standing as an Independent.

Mr Bell said he had been entreated by people from both the unionist and nationalist traditions to stand in Strangford.

He said he wanted to “set a tone for more honest politics”.

“Let people make their own selection. I am telling them to vote for pro-union candidates,” he said.