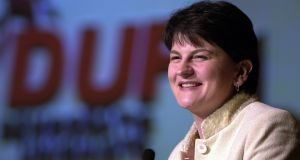 DUP leader Arlene Foster added her voice to criticism of Taoiseach Leo Varadkar’s decision to open a festival in Belfast because of the links between certain events to the Republican movement.

Critics rounded on Mr Varadkar over his decision to launch Féile an Phobail in west Belfast because it includes a talk by the leaders of the 1983 Maze Prison escape in which a prison officer was killed.

Ms Foster said in a message posted on social media website Twitter that she was “very concerned at the message Leo Varadkar is sending with his apparent endorsement of all events at the west Belfast festival.”

Unionist politicians along with Austin Stack, the son of murdered prison officer Brian Stack, and Mairia Cahill, who has accused members of the republican movement of abusing her, objected to the Taoiseach’s decision to launch the festival.

She tweeted that her thoughts were with the family of Brian Stack, David Black and Adrian Ismay - two other prisoner officers killed by republican paramilitaries - and “the families of prison officers who face daily threats”. She added the subject line: “#standwithwhatsright”

Ms Foster made her remarks while retweeting a message posted by Austin Stack criticising Mr Varadkar for opening the festival.

“The romance continues between Fine Gael and Sinn Féin,” he wrote, referring to the murder of the prison officer during the Maze escape. He pointed out that eight weeks after the prison break, some of the escapees murdered Irish army private Paddy Kelly in Ballinamore, Co Leitrim.

Defending his decision to launch the festival, Mr Varadkar said that he was not considering cancelling his appearance and that it was a community festival which Ms Foster had spoken at in the past.

He even pointed out that English singer-songwriter Olly Murs who appeared on the X Factor TV talent show in 2009 was appearing at the festival.

“I believe the headline act this year is Olly Murs. I don’t think anyone could accuse him of being a die-hard republican,” said Mr Varadkar.

This is his sixth visit to Northern Ireland since becoming Taoiseach last year.

He travelled north on Thursday night ahead of a historic visit to the headquarters of the Orange Orange and the Museum of Orange Heritage in Belfast, the first such visit by a Taoiseach, on Friday morning.

Mr Varadkar visited the oldest GAA club in Co Down at Mayobridge on Thursday evening before meeting the chief executives of the north-south implementation bodies in Newry.