President warns against ‘uncritical pursuit of globalisation’ and ‘Davos’ capitalism 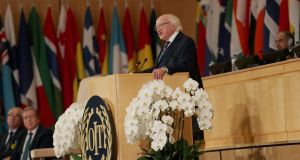 President Michael D Higgins has said that a growing form of diplomacy, dominated by narrow self-interest and dismissive of hard-won fundamental rights, recalls “the worst moments of the previous century”.

At a conference organised by the International Labour Organisation (ILO) in Geneva, Mr Higgins warned of a fractured UN and called for greater efforts to tackle the “self-promoting voices” of neoliberal “Davos” capitalism.

Mr Higgins was the keynote speaker at the 107th session of the International Labour Conference, held at the UN’s Geneva headquarters. Ireland is currently serving a three-year term on the governing council of the ILO, established in 1919 as a forum for governments, workers’ representatives and employers.

Mr Higgins recalled how the ILO was the first international organisation the newly independent Irish state joined in 1923, and paid tribute to distinguished civil servants such as Edward Phelan who dedicated their careers to the organisation.

The ILO priorities – of decent work, social protection and recognition of fundamental rights – had informed and enriched Ireland’s development, he said, not least the 1998 Northern Ireland peace agreement.

Mr Higgins paid tribute to the “moral vision” of the ILO and said its core principle – that lasting peace depends on social justice – was never more timely in a world “marked by war and the rumour of war”, a neoliberal consensus that “sanctions poverty amidst plenty”.

“I think we are very deficient in this regard. We are producing one-trick ponies,” he told The Irish Times after his address.

He expressed hope that the ILO would, in future, be more energetic and visible in addressing the risks arising from individual, anonymous labour arrangements.

“We cannot go on and introduce strategies that are judged in terms of metrics and not social impact,” he said, expressing hope that the EU reform debate – driven by Paris and Berlin – would reflect this.

“It is possible within the treaties to achieve fiscal prudence and financial caution but, at the same time, deliver on investment strategies.”

He said meetings with the UN High Commissioners for Human Rights and Refugees, Zeid Ra’ad Al Hussein and Filippo Grandi respectively, were overshadowed by efforts “by some countries more than others” in the UN security council to dominate the body.

“I think it is very necessary for people not to be intimidated by the actions and rhetoric of the strongest,” said Mr Higgins.

On whether he would run for a second term, Mr Higgins reiterated he would give an indication in July regarding his plans. “My decision doesn’t affect anyone else’s decision but mine is coming after a lot of thought,” he said.

Asked about his meeting this week in Dublin with women who worked in Magdalene Laundries, Mr Higgins said it was “far beyond time” that all records relating to them be released.

“They have a fundamental right to information,” he said, “and they should be made available without delay.”

Guy Ryder, director-general of the ILO, welcomed Mr Higgins as representative of a country that was “no stranger to conflict but has amply demonstrated its vocation for peace”.

“The system must allow employers to respond to changing business demands,” he said, “while also creating opportunities to build decent work for those who wish to vary their levels of participation in the workforce.”

On Friday Mr Higgins and his wife, Sabina, head to Zürich to visit the city’s James Joyce centre and lay flowers on the author’s grave.