McNamara served as spokesman on Northern Ireland from 1987 to 1995 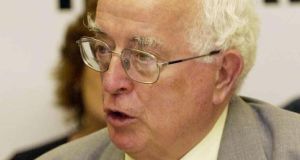 Former Labour MP Kevin McNamara has died at the age of 82 after he was diagnosed with inoperable pancreatic cancer last month. Photograph: PA Wire

Mr McNamara had been an MP for 39 years, first elected in 1966 and retired in 2005, representing Hull North constituency in Yorkshire.

He was on holidays in Carboneras, Spain last month when he became ill and was diagnosed with inoperable pancreatic cancer.

He was transferred by air ambulance to hospital in England on July 28th, before returning to his home in Formby, Merseyside.

He died on Sunday morning.

In a statement the McNamara family said “he died peacefully at home, surrounded by his family following a short and unexpected illness”.

Born in Liverpool in 1934, Mr McNamara was educated by the Christian Brothers at St Mary’s College, Crosby and University College Hull where he studied law.

He became head of history at St Mary’s Grammar School, Hull and subsequently lectured in law before becoming an MP.

He his survived by his wife Nora whom he met at university and by a daughter and three sons. A fourth son pre-deceased him.