Handful of supporters turn up for Britain First rally in Belfast 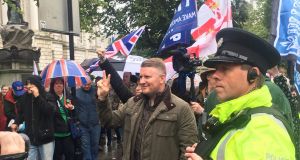 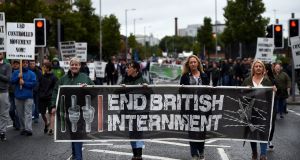 An anti-fascist protester was arrested after a soft drink can was thrown at far-right Britain First leaders gathered outside Belfast City Hall on Sunday afternoon.

About 30 “Loyal Peoples’ Protest” activists protested outside the front of City Hall for what they told the Parades Commission was an “anti-terrorism march, including Islamic extremists and Irish republican extremists”.

“Our aim was to get the Anti-Internment League parade stopped from entering Royal Avenue, and we succeeded so we did,” said a spokesman, who did not want to be identified.

At a separate demonstration at the side of City Hall, the Northern Ireland Against Terrorism rally – organised by Independent unionist councillor Jolene Bunting – saw 50 people gather to hear speeches from Britain First leaders Paul Golding and Jayda Fransen.

Mr Golding declined to speak to The Irish Times on what was described as “fake news” grounds. His speech was disrupted when a lone man threw a soft drinks from the other side of the road.

Police swooped in to separate the man from angry demonstrators and was taken away in the back of a police vehicle.

Jayda Fransen Britain First thanks #protesters and Cllr Bunting for the welcome, adding "It takes a brave woman to say I've had enough" pic.twitter.com/bLDXgfoQqq

Dee Fennell speaks of being denied entry to #Belfast city centre - thanks people for attending pic.twitter.com/88Uo3MjoPU

A 23-year-old man was arrested for disorderly behaviour.

Supt Melanie Jones said: “PSNI is committed to ensuring that all parades and associated events that take place in our city are peaceful and successful. To this end we will always implement the most appropriate policing operation to ensure the safety of participants, spectators and the general public.

“Today’s parades and protests concluded largely without incident, and police were able to ensure the city centre returned to normal business as quickly as possible.”

After the incident, in a speech criticising Islam, Ms Fransen told the crowd that Britain First was now registered as a political party in Northern Ireland and that she would be leading the movement as “Ulster is in my opinion the last line of defence for Britain”.

She said she intended to “take on every corrupt politician”, and vowed to “get our bloody flag back up to the top of that building”, referring to City Hall, where councillors democratically voted in 2012 to fly the union flag on designated days, in line with royal protocol, rather than all year round.

Cllr Bunting said she had invited Britain First to Belfast because “they stand up for free speech and against terrorism”. Ms Bunting said she did not believe the group was racist, xenophobic and anti-Muslim.

Among around 30 people protesting against Britain First’s presence in the city at a Belfast Says No To Fascism counter rally was People Before Profit MLA Gerry Carroll.

“Britain First represent absolute poison,” said Mr Carroll. “They are a fascist organisation which came out of the BNP and they are trying to stir up racism and division in society. We are standing up against everything they represent.”

Meanwhile, the republican Anti-Internment League (AIL) parade passed off peacefully. Marching from Ardoyne in the north of the city, organisers said it was arranged “to highlight the continuing use of internment via revocation of licence, miscarriage of justice and by remand, both by Britain and the 26 county administrations”.

The parade of about 300 reached Clifton House in North Queen Street, where the Parades Commission had limited it to, and dispersed soon afterwards.