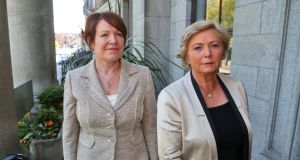 The Cabinet will be told today substantial extra resources will be needed for extended overtime for An Garda Síochána as it seeks to tackle organised crime by so-called saturation policing.

Tánaiste and Minister for Justice Frances Fitzgerald is to update Ministers today on efforts to tackle criminal feuding in Dublin’s north inner city after a spate of recent murders.

The Government has been under pressure on a number of fronts in the justice area, following the publication of the O’Higgins report into alleged Garda malpractice, and the ongoing feud between the Kinahan and Hutch gangs in Dublin.

The feud has claimed seven lives, the latest of which was Gareth Hutch, who was shot dead in the north inner city last week. A woman in her 40s is due in court this morning in connection with his killing.

Sources said the Minister for Justice is to inform Cabinet that the State must be prepared to incur significant extra expenses to allow the Garda maintain and increase the number of members of the force tackling crime in the affected area.

She is also expected to tell Ministers it is her intention to have staff from the Revenue Commissioners and the Department of Social Protection seconded to An Garda Síochána to help with investigations.

It is understood the memo to be brought by Ms Fitzgerald today will be for information only but she and Taoiseach Enda Kenny have already said whatever resources are needed by the Garda will be made available. “There will be an overtime cost and we are going to have to pay it,” said a source.

A final estimate of the increased money needed is not yet available. The Government has faced calls to increase funding to the force from a number of quarters, such as Garda representative organisations.

Ms Fitzgerald is also expected to outline other legislative measures to support the work of the Garda.

Separately, sources said both Ms Fitzgerald and her department were unaware of a meeting between Fianna Fáil TD John McGuinness and former Garda commissioner Martin Callinan, in which it is alleged Mr Callinan said whistleblower Sgt Maurice McCabe was not to be trusted.

Mr McGuinness, a former chair of the Public Accounts Committee (PAC), claimed in the Dáil last week Mr Callinan asked to meet him in a Dublin car park in January 2014. This was at about the same time as the PAC was investigating the controversies over the penalty points system. Mr Callinan at the time called the actions of whistleblowers “disgusting”.

The spokesman declined to say whether Ms O’Sullivan approved or disapproved of Mr Callinan meeting the TD.