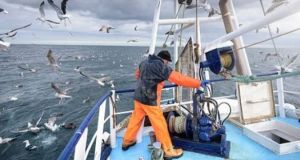 The Minister had wanted to complete all stages of the Irish Fisheries (Amendment) Bill in the Seanad on Thursday to have it finalised before the March 29th deadline for the UK’s departure from the EU.

A final decision on legislation allowing Northern fishing vessels access to Irish waters has been delayed until two days before the Brexit March 29th deadline while Minister for the Marine Michael Creed has talks with fisheries’ organisations.

Fianna Fáil, Sinn Féin, Labour and the Civic Engagement group of Senators would only allow the Irish Fisheries (Amendment) Bill go to committee stage. The groups together make up a majority in the Upper House.

Fianna Fáil Seanad leader Catherine Ardagh proposed the amendment and said her party broadly supported the legislation but there needed to be “much more meaningful engagement” with the stakeholders.

The Minister had wanted to complete all stages of the Irish Fisheries (Amendment) Bill in the Seanad on Thursday to have it finalised before the March 29th deadline for the UK’s departure from the EU.

Mr Creed said there had been “much scaremongering” about the Bill but insisted it would not give Northern fishermen preferential treatment.

The legislation aims to restore access by northern vessels to the State’s exclusive six-mile inshore fishing zone, from the shore to six miles (9.6 km) out to sea. Irish vessels have reciprocal access to northern waters but Irish fishermen claim Northern vessels would have an advantage under the legislation.

Access to the Irish waters by Northern vessels under a decades-old voisinage or informal arrangement was deemed void following a Supreme Court judgment in 2016 after a case was taken by four Irish mussel fishermen.

The Government was embarrassed following the recent detention by the Naval Service of two vessels from the North for illegally fishing in Irish waters, a move the DUP claimed showed the Government wanted to introduce a “sea border” while demanding an open border on land.

Mr Creed moved to implement the legislation which has languished in the Seanad since 2017.

Fianna Fáil whip Diarmuid Wilson said if the Minister engaged with the fishing organisations to address their concerns and “there is a satisfactory outcome to that engagement, we will agree to take Report and Final Stages in the week that the Seanad returns”.

Sinn Féin Senator Pádraig Mac Lochlainn said “we support the principle of Irish fishermen across the island of Ireland being able to access Irish fishing waters but it has to be on a level footing in both jurisdictions that permits Irish fishermen to fish in Irish waters, in vessels of a certain size”.

Mr Mac Lochlainn said “those Irish fishermen were forced to go to the Supreme court to defend natural resources” and every fishing organisation opposed the legislation.

Mr Creed insisted in the Seanad that “while there has been much scaremongering, the access arrangements for Northern Ireland boats will not change from what they were before”.

He said northern Ireland boats “will simply regain fishing access they have had for decades”. He stressed that they would “also continue to be subject to the same measures that apply to Irish-registered fishing boats”.

The Minister added that “it is my intention to introduce an amendment at Report Stage to specify this conditionality of access to give further assurance to the House that there is no question of preferential treatment for Northern Ireland vessels while fishing in our 0-6 zone”.

There is pressure on the Government to remove the “sea border” and the issue was raised in the House of Commons on Wednesday. Minister of state for rural affairs Rupert Goodwill said “I am pleased that the Irish Government have committed to resolving that issue, and we will monitor any moves closely”.