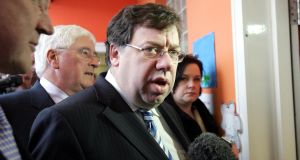 Former taoiseach Brian Cowen said he expects the UK to delay Brexit but could not say what it would bring as there was “very little room” for the EU to manoeuvre.

Speaking at the Cheltenham racing festival, the former Fianna Fáil leader said he did not think it was possible to bet on where the Brexit process would go next due to the entrenched opposition of Brexiteer MPs at Westminster.

“I think there will be an article 50 extension,” he said, referring to the mechanism by which a country leaves the EU.

“Where that will take us I don’t know. It is just very difficult. There is very little room to manoeuvre from the EU side,” Mr Cowen added.

“No matter what assurances are given or interpretative documents seem to be provided. There seems to be people finding a reason why not to support it rather than take them at their word.”

He was speaking beside the winners’ enclosure at Cheltenham’s Prestbury Park racecourse where he was part of a group celebrating City Island’s victory in the Ballymore Novices’ Hurdle. The horse is owned by Bernardine Mulryan, wife of property developer Seán Mulryan, whose company sponsored the race.

Other members of the group included film director Jim Sheridan and the artist Guggi who travelled over from Dublin for the second day of the four-day jump racing festival.

Mr Cowen said he had money on City Island, trained by Co Kildare-based Martin Brassil and ridden by Mark Walsh.

The former taoiseach, in Cheltenham for three days of the festival, said that he watched the House of Commons vote on someone’s phone as he left the racecourse on Tuesday evening.

“It means you don’t miss it too much,” he said, of politics and the parliamentary turmoil around Brexit.

He described the deadlock over the proposed EU-UK divorce deal and the contentious backstop to avoid a future hard Irish border as “an unfortunate situation” because it was only “a contingency insurance policy”.

He agreed that it was getting “very close to the wire” and the UK’s scheduled departure from the EU on March 29th for no deal to have been agreed on an orderly exit.

“It is unfortunate that it has got to this point. You just have to hope common sense will prevail. There seems to be a majority that won’t want a crash-out and that is important from our point of view,” he said, speaking hours before British MPs vote on Wednesday evening on whether the UK should leave the EU without a deal.