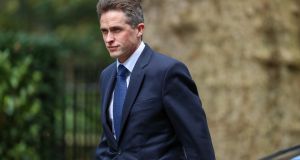 Gavin Williamson, UK defence secretary, said his ministry is working across government to drive through a new package of safeguards ‘to ensure our armed forces are not unfairly treated’. Photographer: Simon Dawson/Bloomberg

Britain’s defence secretary Gavin Williamson has said his government will urgently reform the system for dealing with legacy issues following the decision to charge a former soldier for the murder of two men on Bloody Sunday.

Mr Williamson said the ministry of defence would fund all the accused man’s legal costs.

“We are indebted to those soldiers who served with courage and distinction to bring peace to Northern Ireland. The welfare of our former service personnel is of the utmost importance and we will offer full legal and pastoral support to the individual affected by today’s decision. This includes funding all his legal costs and providing welfare support,” he said.

“The Ministry of Defence is working across government to drive through a new package of safeguards to ensure our armed forces are not unfairly treated. And the Government will urgently reform the system for dealing with legacy issues. Our serving and former personnel cannot live in constant fear of prosecution.”

Labour’s shadow Northern Ireland secretary Tony Lloyd said it was a difficult time for the relatives of those who were killed on Bloody Sunday who had shown dignity throughout their pursuit of justice.

“Today’s announcement does not change the findings of the Saville Report that those killed 47 years ago were innocent and the fight for truth and justice over many decades was vindicated. These families have had to wait far too long and it is in the public interest that the prosecution takes place as soon as possible,” he said.

“There are many more families from all sides of Northern Ireland’s divisive conflict who are still waiting for truth and justice. Today we should remember all those who lost their lives in The Troubles, the dignity shown by the Bloody Sunday families and redouble our efforts to ensure lasting peace and justice in Northern Ireland.”

The DUP’s Gregory Campbell used a point of order in the House of Commons to ask why there had been no investigation into the killing of police officers in Derry shortly before Bloody Sunday. He said there was a “massive imbalance” in legacy investigations into the Troubles.

“It is not my intention to intervene in any way on the legal process, but I was born and raised in the city, which I now represent in Parliament, and as a teenager I was there in the city centre on the day,” he said.

“I watched the events that led up to that day, including the murder of two police officers in the vicinity of the parade just three days before that parade commenced. No prosecutions have ensued as a result of any investigation, either through the Saville inquiry or any other police investigation since.”

Conservative MP Johnny Mercer, a former army officer, described the decision to prosecute the former soldier as “an abject failure to govern and legislate” on the watch of a Conservative government.

“When I speak of a chasm between those who serve and their political masters in this country, I mean this,” he said.