DUP Brexit spokesman warns initial signs are not good, but his party will analyse deal in full 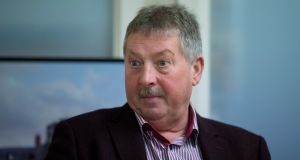 Sammy Wilson: DUP want to give due diligence to what has been said. Photo: Liam McBurney

DUP’s Brexit spokesman Sammy Wilson has said Theresa May’s assurances on the Irish backstop fall short of what she herself has promised.

Speaking to radio station LBC, Mr Wilson said, however, that the party want to give due diligence to what has been said.

“I’ve got to say if you look at what the prime minister has said so far, it seems to fall short of what she herself has promised. Because she is simply it reduces the chances of us being kept in the backstop.

“We promised last night that whatever came out of Brussels, we would look at very closely. We would also take advice on it and come to our own conclusions.

“That’s how we will judge the changes which have been made and what has been agreed.”

Mr Wilson says his party is not averse to the postponement of Tuesday’s vote in the House of Commons about the withdrawal agreement.

“If the government wants full scrutiny and not to be accused of rail roading this through, then there is the option to put the vote off, we wouldn’t be averse to that,” he told BBC Radio Ulster.

The DUP will listen to the Attorney General’s advice, talk to colleagues across Northern Ireland, members of the Conservative Party and will also seek independent legal advice, he said.

“We will give it a fair hearing. All those things will go into the mix before making a decision.

“We have set out our criteria to back any deal, if they are not met then we will vote against it.”

Mr Wilson said that the decision was not be the DUP’s responsibility alone. “At the end of the day it will be a collective decision.

“We have to gain control over our laws and trade, if the agreement doesn’t give us that then we won’t support any agreement.”

He added that it was reasonable for some to point out that today’s vote should be deferred “because there is so much to be examined.”

The Chief Whip of the DUP, Jeffrey Donaldson, says that his party has not come to a decision yet on new EU backstop measures.

“We will have to take time to study it and look at the legal consequences,” he told RTÉ Radio’s Morning Ireland.

Mr Donaldson said he wants to see if the Attorney General’s legal advice has changed from the position he took previously in relation to the backstop.

When asked if the vote on the withdrawal agreement in the House of Commons Tuesday should be deferred, Mr Donaldson said “we could do with more time to come to a definitive agreement.”