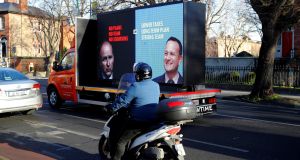 Fine Gael and Fianna Fáil have reached agreement on a historic joint framework which they hope will see them enter into a “full and equal partnership” for five years.

In a message to members of the Fine Gael parliamentary party, chairman Martin Heydon wrote: “The Taoiseach has asked me to inform the parliamentary party that he met Micheál Martin earlier today and that they have agreed a policy framework document that could form the basis for a Programme for Government. They reaffirmed their commitment to forming a majority government of three or more parties/groups that will last five years with full and equal partnership between FG and FF at its centre.”

In a statement Fianna Fáil said: “Both leaders met this morning and agreed the framework document. Both leaders will brief their respective parliamentary parties tomorrow”.

The joint framework document is not expected to be published until then.

After members of the Fine Gael and Fianna Fáil parliamentary parties are briefed on the agreement on Wednesday afternoon it is expected the framework will then be sent to smaller parties.

There is also an understanding that Fianna Fáil will hold the Taoiseach’s role in the first period of Government.

Minister for Social Protection Regina Doherty said it was a positive development. “Although I haven’t received an official update if what I am hearing though is true I think it’s a really positive development. So fingers crossed, we are going to see the document tomorrow and I think then we will do our level best obviously to try and engage with all other interested parties and indeed our own parties to ensure we get a very stable government to bring what is Ireland in a difficult situation out of the current situation both medically and economically and to get us back on an even keel and back to the good times that will come again,” she told RTÉ’s Drivetime programme.