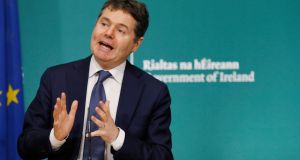 The joint framework document between Fianna Fail and Fine Gael, which is likely to be agreed on Friday, will be flexible and open enough to appeal to smaller parties who may be potential partners in government, Minister for Finance Paschal Donohoe has said.

Negotiating teams from the two parties are expected to finalise the agreement following further discussions on the document - believed to be 12-13 pages in length - and that it would then be subject to endorsement from the two leaders, Taoiseach Leo Varadkar and Micheál Martin.

“It’s up to the two party leaders then if they are going to affirm it, and it’s up to them then to decide what they want to do then with other parties,” said Mr Donohoe, speaking at a briefing at Government Buildings.

“The bit that I would emphasise is that this is a basis for discussion. The document that I think will be agreed will reflect two things. Firstly, the message we heard on February 8th (the general election), and the second thing is the economic reality where we are now post Covid-19.”

He said he believed there would be a sufficient basis in it to allow a situation where “other smaller parties will want to play a part in it with us.”

Asked was it now a done deal between Fianna Fáil and Fine Gael, and would the two leaders formally agree, Mr Donohoe said: “The formal endorsement isn’t on it, but look, it’s very likely that it will be on it.

“Each negotiation team is in contact with the party leader all the time. This is just a final step where they’ll want to see what emerges at the meetings that happen today and make sure they are happy with any changes that happen during the day.

“But it is the case that up to this point in our own party, the Taoiseach has been well aware of all that we are doing and he will just want to see does the end product look different to where we were during the week.”

The framework government document is described as a broad and loose indication of policy priorities. Mr Donohoe said that the government would be facing huge challenges with large numbers of jobless, the economy in deep deficit, and a global contraction of unprecedented scale.