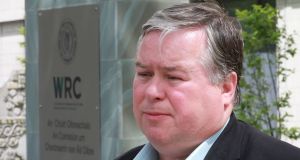 Health service and other essential workers on the coronavirus frontline are facing a growing childcare crisis that the government needs to address, the trade union Siptu has said.

The union said on Tuesday some personnel were having to call in sick because they had no alternative arrangements for looking after their children. Adding, that a scheme to assist health and other key workers with childcare arrangements which was promised by the government had not been put in place.

Siptu health division organiser Paul Bell said “it’s time for the government to provide essential workers with the childcare provision they need in order to continue their work against coronavirus.

“Our members are absolutely committed to doing whatever it takes to defeat Covid-19 and have proven, through this crisis, to be professional, committed, flexible and compassionate workers. However, many are now reporting that the stress of working in an environment that deals with life and death on a daily basis is being compounded with the uncertainty of not having the proper support to take care of their children.”

Mr Bell said many health workers were married to, or had partners, also working in the health service. He said this was having a major knock-on across all grades and services.

“Some members have reported to their union officials that they have had to request emergency annual leave or in some cases call in sick in order to take care of children or to allow their husband, wife or partner to attend work on the frontline.”

Mr Bell said Siptu was calling on Taoiseach, Leo Varadkar, and the Minister for Health, Simon Harris, to immediately publish the government’s proposals for the provision of childcare for health and essential workers.

On April 6th the Taoiseach said the Government was ready to push the button on providing childcare to essential healthcare workers. However, he added it needed public health clearance in order for the initiative to go ahead. Mr Varadkar said a number of proposals had been put together which were being considered by the national public health emergency team.

The Taoiseach said it was not an issue of money or staff available, it was an issue of public health clearance. Explaining this was something the government really wanted to do and he said it was taking much longer than they would like.

The general secretary of the Irish nurses and midwives organisation (INMO) Phil Ní Sheaghdha said last week that its Covid-19 freephone number was receiving as many calls about childcare concerns as it is about protective equipment.

The Irish Times reported last week that some nurses maintained they were paying up to €110 per day to secure childcare for their children to allow them to go to work.

Labour Party leader Alan Kelly urged the Government on Tuesday to outline when exactly it would roll out a childcare scheme for healthcare workers.

“Many frontline healthcare workers are relying on the kindness of their friends, families and neighbours as a temporary stopgap for childcare provision. This is not a reliable solution as those who are providing the childcare may get sick or have to deal with the unknown unknowns of their lives.”