FF and FG will not give ‘fait accompli’ to other parties 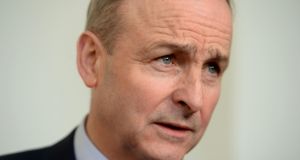 Micheál Martin: he warned a recession from Covid-19 may be deeper and economic recovery slower than may have been initially expected

Fianna Fáil and Fine Gael will not present a “fait accompli” to other parties they want to join in government with them, Micheál Martin has said ahead of the publication of a framework document between the two Civil War parties.

Negotiating teams from the parties of Mr Martin and Leo Varadkar are expected to meet on Friday to sign off on the framework document outlining the broad priorities of a potential coalition government involving the two.

Between them Fianna Fáil and Fine Gael have 72 Dáil seats, eight short of a majority, and Mr Martin and Mr Varadkar have both said they want a third smaller party to join such a government.

The Labour parliamentary party met on Thursday, and is understood to have reiterated the view of leader Alan Kelly, who has said others should form a government.

The Green parliamentary party also met a number of times this week, but it is maintaining the view that a government of national unity should be formed to tackle coronavirus.

The Social Democrats have said their policies would not be compatible with those of a Fianna Fáil-Fine Gael government.

The framework government document is understood to be around 12-13 pages long, and is described as a broad and loose indication of policy priorities. Mr Martin said, however: “I think it is important that we don’t present a fait accompli to people.”

He said the “important point is the philosophy, the orientation of the document, and of the policy positions adopted in terms of housing, health, climate change, all in the context of economic recovery”.

He also warned that a recession caused by Covid-19 may be deeper and economic recovery slower than may have been initially expected.

“As the days and weeks go by it is becoming clearer that we may be looking at a much slower recovery, that it might be a much deeper recession than maybe initially anticipated, and that some sectors might find it difficult to bounce back after the worst of Covid-19 is over.”

Sources with knowledge of the document said that while there is emphasis on the recovery from the current crisis, it will also contain a desire to tackle some of the issues of the last general election campaign such as housing, health and climate change.

It is also said to contain a road map to a single-tier healthcare system, a State childcare scheme and greater State involvement in the housing sector.

Mr Martin also said a government with a strong majority was required to take the decisions needed to deal with and recover from the Covid-19 crisis, and it is understood such language is echoed in the document.

While saying he did not want to “overstate” matters, Mr Martin said: “I think it is a strong document. It does point very much in the direction of greater State-led intervention in areas like childcare, moving towards a single-tier health system, but also transform the experience in terms of access to housing.”

This would be “both public housing and affordable housing and also in terms of a new green deal, in terms of the opportunities that may arise as a result of Covid-19 in terms of reconfiguring our economy and our society, and meeting those climate change goals and objectives that we all share.