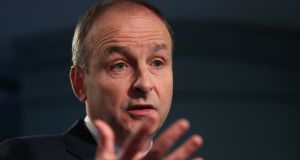 The Fianna Fáil parliamentary party has given Micheál Martin a mandate to explore coalition options with all parties, except Sinn Féin. Photograph: Nick Bradshaw/The Irish Times 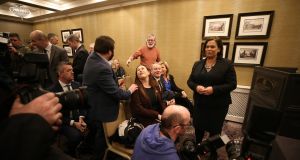 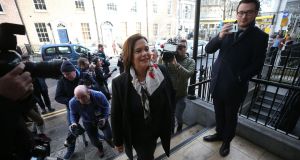 Fianna Fáil leader Micheál Martin has confirmed he will “reach out” to Fine Gael and other like-minded parties with a view to forming a government.

Shortly after confirmation emerged from a meeting of his parliamentary party that they would not entertain any partnership with Sinn Féin, Mr Martin said he would likely speak to Taoiseach Leo Varadkar over the weekend or next week.

“I don’t see anything substantive happening before next week,” he said in an interview on RTÉ’s Six One News.

The Fianna Fáil leader also said nobody in his party had asked him to step down as leader during Thursday’s four-and-a-half hour meeting which, he said, was designed to be an open exchange of views among its members.

Fianna Fáil is now preparing for exploratory talks with the Green Party and the Social Democrats, although Mr Martin stressed that a realistic programme for government was required.

“What this is about really, can a programme for government be agreed which will urgently deal with housing, health, climate change and the regional imbalances and making sure rural Ireland is viable in the future,” he said.

He also said the party had decided to stick to its commitments of non-cooperation with Sinn Féin due to “irreconcilable” differences in economic policy.

Earlier on Thursday, at the lengthy parliamentary party meeting he told deputies Fianna Fáil could not “stand on the sidelines” and there was an obligation on it to lead a government.

He told deputies that unlike Fine Gael it was not Fianna Fáil’s intention to enter opposition, rather to try and lead a new government comprised of like-minded parties.

While a small number of deputies said they remained open to talks with Sinn Féin, a majority of the party’s 38 TDs backed Mr Martin’s plan to seek to form a government without Sinn Féin participation.

A number of Fianna Fáil deputies, speaking on the basis of anonymity, said that having ruled out Sinn Féin, the only possible eventuality would be a coalition involving Fianna Fáil, Fine Gael and the Green Party.

The meeting began at 12pm on Thursday and was finished shortly after 4pm. In a long address to the much-reduced parliamentary party – Fianna Fáil lost seven seats in the election – Mr Martin argued that as the largest party in the Dáil, it had a mandate to enter negotiations with a view to putting together a coalition it could lead.

Several times, he told colleagues that Fianna Fáil could not “sit on the sidelines” to allow instability to take root at a crucial time.

The prevailing view within Fianna Fáil is that efforts by Sinn Féin to form a left-leaning coalition will not be successful because of a lack of numbers.

Speaking ahead of the meeting a further five TDs – Niall Collins, Pádraig O’Sullivan, Brendan Smyth, Cathal Crowe and Cormac Devlin – said separately they opposed such an arrangement with Mr Devlin telling reporters the party had no mandate to forge a deal with Sinn Féin.

“I believe Sinn Féin and other left-of-centre parties have got a strong mandate from the people to try and form a government,” he said.

Elsewhere, a close ally of the Limerick TD Willie O’Dea told The Limerick Leader there was more of a chance of Mr O’Dea sharing power with Vladimir Putin or Donald Trump than Sinn Féin, and his constituency colleague Maurice Quinlivan.

The only TD who struck a note of ambivalence in his comments was the Sligo-Leitrim TD Marc MacSharry show said there was a pre-election position on Sinn Féin but said he did not want to preempt what consensus might emerge as to the party’s stance on the issue. Asked did the party need to replace Mr Martin as leader, he responded: “Definitely not.”

The upshot that Fianna Fáil TDs have taken from the meeting is that the party’s strategy is now to pursue a coalition involving Fine Gael and the Greens.

One senior TD, speaking on an off-the-record basis, also said that not one word of criticism was levelled against Mr Martin during the four-hour meeting, and the question of his leadership never arose.

“The three take-aways from the meeting,” said the Deputy,” were, number one, Micheál Martin is safe; number two, no dealings with Sinn Féin, and number three, the coalition with Fine Gael and the Greens is very much on,” he said.

Deputies who spoke to The Irish Times immediately after the meeting acknowledged that convincing Fine Gael to enter a coalition would be difficult and also problematic.

One quoted the party’s finance spokesman Michael McGrath who told colleagues that, while all pathways to government presented difficulties, “there is no pathway to opposition.”

Several others said Sinn Féin should be treated respectfully particularly in light of its mandate, but did not go as far as to support any talks.

The Fianna Fáil decision to exclude Sinn Féin comes after Mary Lou McDonald challenged Mr Martin to sign up to her party’s programme for change.

Ms McDonald told a meeting in Dublin of newly elected Sinn Féin TDs that she had written to Mr Martin seeking a meeting about government formation.

In the letter Ms McDonald said: “It is my strong belief that there is an onus and responsibility on parties to engage over the coming days to discuss our priorities as we enter a new Dáil term.We need to explore if common platforms exist to underpin a programme for a government for change.”

Ms McDonald said her preference is to form a government without either Fine Gael or Fianna Fail.

Ms McDonald said there were “big policy incompatibilities” between Sinn Féin and Fianna Fáil her objective was a “government of change”.

Ms McDonald told them “the question is whether Fianna Fáil will sign up for the type of change espoused by her party”.

“It will be quite a challenge for them to sign up to this type of programme for government but Micheál Martin has said that he is a democrat, he listens to the people and respects the decision of the people so he knows that the people want change,” Ms McDonald said.

“It is a duty of the Irish government to commence this process,” she said adding that Unionists “should not fear debate and discussions about the future.”

The Dublin Central TD reiterated the party’s commitment to a pension age of 65, to take the first €30,000 of salary out of the USC and to challenge vulture funds and the insurance industry.

The prospect of a minority government under a confidence and supply arrangement seemed unlikely.

Social Democrats co-leader Róisín Shortall also said she thought a minority government operating without any support agreement from others was also “unlikely at this stage”.

Taoiseach Leo Varadkar has also privately ruled out supporting any government in a confidence and supply deal.

Mr Varadkar said yesterday that it was likely he would be leader of the opposition in the new Dáil but if Fine Gael was needed to provide political stability, his party was “willing to talk to other parties about that”.

Mr Varadkar said “anything is possible” in the coming weeks, “including a second election”. However, a second general election was not an outcome that would be “good for the country”, he said.