‘Seismic break for two-party system’: UK and US media react to Election 2020 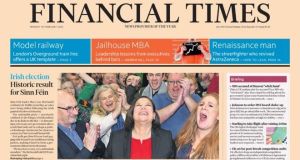 Sinn Féin’s success in the general election has been covered by a number of media outlets abroad.

Sinn Féin has run 42 candidates with both Fianna Fáil and Fine Gael running double that amount and so the final result may see either of the other two parties with more seats than Sinn Féin.

The party’s victory is covered on the front page of the Financial Times with the headline “Irish election - Historic result for Sinn Féin”. The paper’s main picture was of party leader Mary Lou McDonald celebrating her success after she was elected on the first count for Dublin Central on 11,223 votes with a quota of 6,288. Its news piece reports how “Sinn Féin has demanded a role in Ireland’s new government after surging to the highest vote share in a seismic general election that will make it hard for the country’s traditional ruling parties to govern without it. The nationalist party’s breakthrough in Saturday’s election following decades on the fringes of politics is likely to leave Dublin facing political deadlock.”

The Daily Telegraph also covers the election as part of its front page offerings with the headline “Sinn Féin delivers Irish election shock”. In a news piece, John Walsh writes, “Sinn Féin has delivered a political earthquake by winning the popular vote in the general election, raising the prospect it could enter government for the first time in the Republic of Ireland. ”

In its editorial, the Guardian writes that the election was “a vote for change, not the status quo”. It warned British observers to “be more than usually careful not to misread this result. Ireland’s 2020 election was not about Brexit (which only 1% in the exit poll said was important) or the border. Sinn Féin owes its relative success more to a groundswell of young voters’ impatience on domestic economic and welfare issues rather than to a resurgence of old-style republicanism.”

Meanwhile, in an analysis piece, Rory Carroll, the Guardian’s Ireland correspondent writes that the Sinn Féin victory was “decades in the making” and that many of its voters were young people who wanted “to shake things up” and deliver a “black eye” to both Fine Gael and Fianna Fáil.

“Once a revolutionary party associated with guns and balaclavas, a toxic brand, it slowly edged from the fringe into the mainstream, inch by inch, and then on Saturday made a giant leap,” he writes.

The New York Times’ news report headlined, “Sinn Féin on Threshold: Party With Old IRA Ties Soars in Irish Election” writes how the vote “loosened a 90-year stranglehold on power by two center-right parties”. Sinn Féin’s surge was, it says, “a remarkable rebuke to a political establishment that tried to paint it as aberrant and unelectable throughout the campaign. Defying a reputation for extreme risk aversion, Irish voters ignored those warnings.”

The BBC has also been covering the election and reports that analysts suggest the Sinn Féin surge is because the party “managed to successfully tap into the public anger felt in the Republic of Ireland over issues that have dogged centre-right Fine Gael for a number of years - a shortage of housing, rocketing rents and homelessness.”

In an analysis piece, BBC Ireland Correspondent Chris Page writes the result marks a “seismic break for the two-party system”, that substantive coalition negotiations are unlikely to start for a few days and that “at this point there is no obvious pathway to a stable administration.”