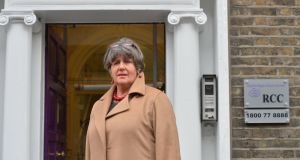 Fine Gael’s decision to nominate Ellen O’Malley Dunlop as its second candidate in Dublin South West will be seen as the party targeting the seat of Minister for Children Katherine Zappone.

Ms O’Malley Dunlop is chair of the National Women’s Council of Ireland and previously spent ten years as CEO of the Dublin Rape Crisis Centre.

She was added to the constituency ticket on Tuesday night at a meeting of Fine Gael’s Executive Council. Her running mate is sitting TD Colm Brophy.

Ms Zappone, who is an Independent Deputy, won the last seat in the five-seat constituency by a margin of only 148 votes in the 2016 election, beating the second Fine Gael candidate Anne-Marie Dermody in the 16th count.

Besides Mr Brophy and Ms Zappone, the other three sitting TDs are Paul Murphy of Solidarity (Socialist Party); John Lahart of Fianna Fáil and Sean Crowe of Sinn Féin.

Fine Gael strategists believe if they are to gain a second seat in the constituency Ms Zappone, as a Government minister, might not attract the same volume of transfers she did in 2016. However, against that her national profile has increased substantially and she is well regarded in her portfolio.

Ms O’Malley Dunlop has very strong credentials as a campaigner against sexual, and gender-based, violence. She has also been on the boards of the Legal Aid Board and with Gaisce (the President’s youth awards).

She said if elected she would continue to work for legislative reform for women’s and victims’ rights.

“I also want Ireland to have a robust 21st century mental health service and I have a range of suggestions to improve services including the expansion of counselling and psychotherapy services.

“I look forward to getting out and about in the constituency to meet the people of Dublin South West and discuss my proposals with them.”

Mr Brophy said: “I am delighted to have Ellen on board as my running mate in Dublin South West. I know she will add a lot to the Fine Gael ticket here with her immense experience of public service.

“Securing two seats in Dublin South West will enable us to further that work so that we can continue to improve people’s standards of living and access to new opportunities. We will be working together with that goal and objective clearly in mind.”

Shane Ross’s ‘naked attention-seeking’ was with us all week