Extending voting rights to emigrants: What are the issues? 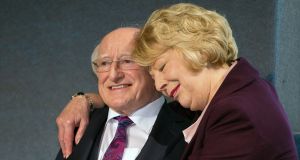 Ireland’s next presidential election in 2025 could be a very different animal to previous campaigns, with candidates needing to reach voters not just in Dublin and across Ireland, but also in Dublin, Ohio, and across the globe.

For the last five years, the Government has been considering a proposal to extend voting rights in presidential elections to Irish citizens outside the State, including, perhaps most crucially, Northern Ireland.

Quietly and behind the scenes in the last few weeks, officials in the Department of Housing have been ramping up preparations to make this a reality.

There have been very good reasons for the long wait to get to this point: the proposal presents enormous logistical, financial and constitutional issues, all of which needed to be examined in detail.

Last week, the department circulated the general scheme of the 39th Amendment of the Constitution (Extension Of The Franchise at Presidential Elections) Bill 2019 to the Oireachtas foreign affairs committee.

This will need to be approved by Cabinet before the summer break if the referendum is to be held in October.

The legislation gives an insight into what the Government is planning. In late autumn, voters will be asked in a referendum to give all Irish citizens living outside of the Republic the right to vote for a president.

This is distinct from other proposals which were considered, including extending voting rights only to those who were born in Ireland, but now live elsewhere, or those who lived in Ireland, or only those with Irish passports.

The decision to offer this on the widest possible scale means all Irish citizens abroad will be treated equally.

The legislation also reveals that the Government plans to extend the length of presidential elections to 90 days from the current 60 days in order to facilitate a postal ballot which is now being viewed as the most feasible way for those outside the State to vote.

This, however, is highly unlikely. In countries where there are provisions for voting from abroad, the number of people who actually cast their ballot from abroad is relatively modest.

This trend of low participation rates can be found in other states in similar elections.

The situation is more complicated in Ireland as Government sources believe that the number of people who will vote from Northern Ireland will be quite high.

Sinn Féin TD for Donegal Pearse Doherty says passing the referendum would present a “clear signal that Irish citizens in the North are valued” and would build upon the Belfast Agreement. He says there are people in places such as Tyrone, Armagh and Down who have never had the opportunity to vote for a candidate who they believe should be their Irish president.

The Belfast Agreement guarantees the right of all people born on the island of Ireland to Irish citizenship. But citizens residing in Northern Ireland are not given a vote in presidential elections as the franchise applies only to citizens ordinarily resident in the State.

It is perhaps unsurprising that Sinn Féin would be in favour of the proposal. A presentation given for the Fifth Report of the Convention on the Constitution by Dr John Garry of Queen’s University Belfast, relying on 2009 data, concluded that Sinn Féin would likely do well out of an extended vote.

Overall, 30 per cent of voters in the North said in 2009 that they would consider voting for Sinn Féin in a presidential election.

The responses to parties such as Fine Gael, Fianna Fáil and Labour showed that voters did not distinguish too much between them.

The appetite in the Republic for extending the vote abroad has been overwhelmingly positive. The result of that constitutional convention was that 78 per cent of members agreed that citizens resident outside the State should have the right to vote in presidential elections.

Passing the referendum would also bring us in line with other countries.

With decisions made on exactly who should be offered the chance to vote, how it should happen and how many may vote, the biggest hurdle, should the referendum pass, will be setting up a modernised register of electors.

This is the first essential requirement and could take up to three years.

An options report prepared by the Government in 2017 found that voter registration should continue to be managed domestically in the State “rather than engaging embassies and consular offices in that role.”

Embassies could have a role in providing information, however. The registration could be managed by one central body or can be assigned to existing registration authorities.

A citizen could use their passport numbers, birth certificate numbers or even foreign birth registration numbers to register and obtain a unique reference code.

Voters would be matched to actual constituencies based on where they were born, where their grandparents are from or whatever other association there is such as in the case of naturalised citizens.

A lot of these issues could be addressed by the long-promised establishment of an electoral commission.

All of this, of course costs money, and quite a lot of it too, at a time when the country is facing the grim possibility of a no-deal Brexit.

And because the Government is favouring the most expansive option of extending the vote to all Irish citizens abroad, the costs are naturally higher.

The biggest initial cost will centre on creating a modern electoral register.

That has been estimated at between €1.6 million and €2.4 million according to the options paper.

Once that has been done, the cost of each election held after that would likely increase in line with the number of registered voters involved. Every new voter would bring an extra cost in terms of the issuing, processing and counting of their ballot papers. There is also a potential cost for “freepost” literature from candidates.

Totting up all of the above has the potential to reach €20 million.

An expensive picture emerges if the almost €15 million cost of holding the referendum itself is added in.

Beyond the costs, there are constitutional issues too, although these are not in any way insurmountable.

The two are clearly linked.

A proposed constitutional amendment will have to remove this link to allow for this extension of the franchise in the case of presidential elections only.

This provision is contained in the general scheme of the Bill circulated to the foreign affairs committee members.

With the logistics, costs, and constitutional issues largely now known, what remains is for the Government to present a compelling picture to the public in order to pass the referendum.

One Fine Gael source, speaking privately, said there are concerns about the Government’s level of preparedness for the referendum.

It’s clear Taoiseach Leo Varadkar, for his part, is determined.

He said in February: “We want to win it”, adding that a “good campaign” was needed.

The biggest concerns internally in Fine Gael are about the integrity of the plans.

The Government will have to guarantee electoral integrity given the perception that out-of-country elections are more susceptible to fraud.

In making his argument in favour of the change, Varadkar is likely to hark back to previous statements by the Government that the president should be elected by the Irish nation, as opposed to the Irish State.

Other arguments likely to be put forward include that we would just be coming in line with the majority of other states, that it is consistent with the Government’s policy on the diaspora, and, perhaps more importantly, that it is in line with the recommendations of the constitutional convention.

Those who argue against enfranchisement appear to be in the minority and the basis for the argument against this proposal is that those outside Ireland do not have to experience the government or president that has been elected, or that it could result in a more radical candidate being elected.

Doherty says this is an insult to the Irish diaspora.

“I think that is actually belittling Irish citizens. We engage with the diaspora in America and Britain on a continuous basis, other parties do too but we do it more.

“Many did not want to emigrate, they are no less Irish and they should have the exact same right to cast a vote for the president who represents them in what is a global role. There is no point in us lighting the globe green on St Patrick’s Day but when it comes to electing a president, saying we don’t trust you.”

So, while the 2025 presidential election will doubtless see candidates campaigning in Ardmore, Co Waterford, they may also have to reach out for support in the lesser known Ardmore in Alberta, Canada, as well as the ones in New Zealand, Maryland, Oklahoma, Pennsylvania, South Dakota and Tennessee.