European elections: Is Ireland ready to take them seriously? 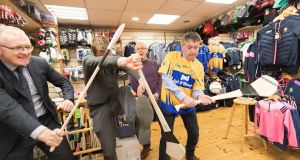 Three weeks ago, Rabbitte took her usual seat among Fianna Fáil TDs and Senators at one of the weekly Leinster House meetings, which have now been cancelled until after the May 24th European elections.

Seeing Rabbitte, a Galway East TD running for the European Parliament in Midlands-North-West, take her place, Martin made a “knock, knock” gesture in her direction.

Rabbitte approached the top table for a quiet word, before leaving quickly after being told by him not to waste her time in Leinster House when there was a European campaign to be fought.

Yet the exact nature of this year’s campaign, taking place against the backdrop of the United Kingdom’s stuttering efforts to leave the EU, is still an open question.

By his gesture, Martin acknowledged that Brexit, Ireland’s future in a reshaped EU or concerns about transport, health and housing have their place, but the path to victory remains the same: door-knocking and shoe leather.

Others, however, see the campaign as “fundamentally different” from the last time Ireland elected MEPs five years ago, and from every occasion since direct European Parliament elections began in 1979.

The European contest has traditionally been a lower-order election – coming third, according to one seasoned political handler, in the “hierarchy of elections”, behind Dáil and council elections, but ahead of the presidential contest.

For some, particularly in Fine Gael, a heightened awareness about the working of the EU since the UK’s decision to leave the bloc in 2016 will sharply define the contest.

“It will be about whether you back the Government’s approach on Brexit,” said one Cabinet Minister.

Nominations for the three Republic of Ireland constituencies closed at noon on Monday, with 59 candidates running across the country. In Dublin, 19 candidates are standing, up from 12 in 2014; 17 are contesting Midlands-North-West, up from 14 five years ago, and 23 names will be on the ballot paper in Ireland South, an increase of eight.

The candidates range from hard-left to hard-right, with strong anti-immigration rhetoric mixing with arguments for the State to leave the EU – common debates elsewhere in the EU, but novel here.

Independents 4 Change TDs Clare Daly and Mick Wallace, running in Dublin and Ireland South respectively, place their pitch in that context, and say they want to fight the far-right in the European Parliament.

Grace O’Sullivan, the Green Party Senator, ran in Ireland South in 2014 and is standing again on May 24th. She finished ninth out of 15 on first preference votes five years ago, with a vote share of 4.2 per cent.

She subsequently ran in the Waterford four-seater in the 2016 general election, and finished sixth on first preferences, before getting elected to the Seanad.

For O’Sullivan, who has been campaigning since Christmas, the main difference between now and 2014 is not Brexit but voters’ engagement on climate issues. “Obviously every single person is aware of Brexit.

“The problem is it has become so messy, and there is so much insecurity, people are a little bit jaded at this stage.” On climate change, however, there has been a “a seismic shift compared to five years ago”, she says.

Privately, Fine Gael believe increasing awareness on the subject could benefit the Greens. O’Sullivan, said one Minister, is the “one to watch” in Ireland South.

Voters engage in different ways on the subject, says O’Sullivan. From the young there is a “real mass of support” for action. Meanwhile, older people are concerned about food production, agriculture, land use and the transition away from fossil fuels.

Matt Carthy won a seat for Sinn Féin in Midlands-North-West in 2014, and is strongly tipped to hold it this time. Carthy says the European elections have always been “second order” and will remain so.

Not much has changed in voter perception of the elections in the past five years, he says, even though he would prefer it to be otherwise.

“But I don’t think that is the case, in terms of a huge move from where we were five years ago. It is still a second-order election, no question about it. You would still have, at this point, people expressing surprise that European elections are on,” he says.

The fact that most of the door-to-door canvassing is done by local activists championing council candidates underlines the perception that the European elections are less important.

One senior Fianna Fáil figure disagrees, and says: “There is a sense of them [the European elections] being taken more seriously this time. I think people will get the ballot papers and take them both seriously. It will be challenging for those who are less enthusiastic about Europe, like Sinn Féin and some Independents.”

A Fianna Fáil TD who has campaigned with the party’s European candidates in recent weeks says Brexit will not decide votes: “Not really, no. It is a talking point for people because it is high on the political agenda, but that’s it.”

Regina Doherty, the Minister for Social Protection, and also Fine Gael’s national director of elections for the Brussels ballot, says the European election “is going to be affected by Brexit but is not going to be dominated by it.

“I think it will be dominated by climate change, data security, the rights to travel.”

She agrees with O’Sullivan that “a particular generation of people are paying attention to and demanding action” on climate change.

She says there is a greater appreciation among voters about the role the EU plays in Irish life. Whereas previously the experience of the EU may have been negative, the solidarity shown by the bloc during Brexit is a positive influence “they have never experienced before”.

On the European Parliament itself, she says: “There is just a consciousness now that it is a proper, serious parliament where maybe people didn’t think that deeply about it before.”

But does she believe the election will be one in which European issues will dominate, drowning out the domestic?

“I’d be lying if I said I did. It is at a local level. All Irish politics is local. The most pertinent issue is the school place up the road, the pothole, the playground. It is reminiscent of 2009 for me.”

If voters are not expected to raise the standing of the European Parliament elections in their own minds, they are perhaps taking their cue from the political parties themselves.

The candidates on offer are not frontline politicians sacrificing Cabinet careers to serve in Brussels, although Taoiseach Leo Varadkar is said to have tried and failed to persuade at least one of his senior Ministers to do so.

Fine Gael has sought, however, to make Brexit the central issue for one of its candidates. Former SDLP leader Mark Durkan is standing for Fine Gael in Dublin with a “Back the Backstop” slogan.

Durkan, running alongside former tánaiste Frances Fitzgerald, is explicitly pitching himself as a post-Brexit candidate for Northern Ireland. However, Fine Gael TDs say his candidacy is handicapped by a lack of name recognition.

Even those who had been most vocal in support of the idea of Durkan’s candidacy are now “eh, pivoting to saying, ‘I still think the narrative was a good idea’”, says one Fine Gael TD.

Fianna Fáil figures, smelling weakness in the Fine Gael Dublin ticket, are already privately briefing that Fine Gael’s vote share in the capital will be substantially below what Leo Varadkar hopes to achieve come the general election.

Easter weekend is the starting point for the campaign. Posters will be mounted on lampposts in the coming days, the traditional visual cue to the electorate that an election is coming.

Only when they are taken down in the hours, days or weeks after the counting is over will it be clear if Irish voters view the European Parliament differently than before.