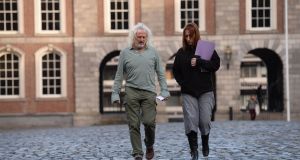 Independent TDs Mick Wallace and Clare Daly: ‘We’ve been thinking about running for a long time and a lot of people were asking us about it.’ Photograph: Dara Mac Dónaill/The Irish Times

Independent TDs Clare Daly and Mick Wallace are running for the European parliament. Ms Daly is contesting the Dublin constituency and Mr Wallace is declaring in Ireland South.

The close political couple will hand in their nomination papers – Ms Daly in Dublin and Mr Wallace in Cork– before Monday’s midday deadline, ending months of speculation in Leinster House that they were going to enter the election race.

According to Mr Wallace, they finally made up their their minds over the weekend during a trip to Cape Clear island in West Cork with fellow members of the Independents 4 Change group.

“We had a weekend of solitude,” said Ms Daly, adding that they got a great welcome from the islanders.

“We’ve been thinking about running for a long time and a lot of people were asking us about it because we’re known for taking up a lot of international issues and would see Ireland in a very international context.”

The Dublin Fingal TD continued: “Europe is everything now, from being Brexit-dominated to so many other issues we have to deal with. Even in the Dáil, they either come from the EU or the EU is used as an excuse, as in, ‘Oh, we can’t do anything about it here because it’s come from Europe.’”

It was touch and go on Sunday morning whether the politicians would be able to get back to the mainland in time for the candidates to formally register. Weather conditions were deteriorating all weekend and there was talk of cancelling the ferry.

“We got out this morning but they told us there might not be another boat until Tuesday,” said Mr Wallace, who “was in two minds for the last five or six weeks” about whether to run.

We’ll work our nuts off if we get elected

“I don’t know yet if it’s the right decision, but if we don’t do this now we will always wonder if we should have done it,” he explained. “Can we make a difference? I like to think we made a difference in the last eight years, but the people can decide about that.”

He thinks the EU “needs a big shake-up” with “smaller operators being squeezed out” and “even farmers beginning to feel it”.

“I know some people say it’s like a retirement home, but we won’t be found wanting. I don’t do retirement.”

“I want to just go out there and give it a shot,” said Ms Daly, adding that they won’t be having a proper campaign launch until the Dáil rises for the Easter recess and they can clear the decks.

Mr Wallace promised: “We’ll work our nuts off if we get elected.”

No office party bookings or loud music permitted as restaurants reopen 20:02
Restrictions on nursing home visits will ease from next week 19:52
Thirty-six on waiting list for CMH ahead of mentally ill murder accused, court told 19:30
Poultry farmers urged to be on high alert for signs of bird flu 19:27
Shoppers expected to buy into late store openings and crowd-control measures 18:58