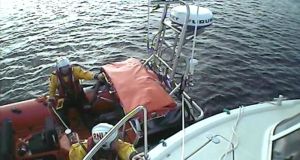 A party of four adults and three children had to be rescued from Lough Derg after the boat they had hired for a day trip on the water ran aground on rocks on Thursday afternoon.

The group’s 60ft cruiser got into difficulty in Coose Bay near Portumna shortly before 4pm.

After the Valentia coastguard was contacted, a volunteer crew from the RNLI was dispatched and was on the scene within minutes.

All seven passengers were wearing lifejackets and were unharmed.

An RNLI statement said the vessel had run aground on “extremely hazardous shoal” close to the shore.

Members of the RNLI crew boarded the cruiser and established that while the boat was in good condition with no leaks, there had been significant damage done to the rudder.

The crew towed the boat off the rocks and into safe water and stayed on the scene until staff from the cruiser company arrived and brought the boat to safety.